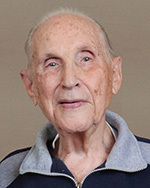 Recent photo of Fr Hermann taken by a member of the Miri Diocese.

MIRI: Catholics in and around Miri are invited to a requiem mass for the late Fr Hermann Plattner at the Carmelite Chapel, Brighton Road here tomorrow commencing at 7:30pm.

The late Fr. Hermann, who spent 51 years doing missionary work in various parts of Sarawak including Miri Diocese (for 30 years), died at 12:30 pm on June 27, 2016 in his homeland in Herberthaus, Brixen, Italy, at the age of 93.

“He will be fondly missed and remembered by thousands of Catholics in Sarawak. A requiem mass will be held at the Carmelite Chapel, Brighton Road, Miri on Monday, July 4 at 7.30pm. All who know him are invited to come and pray for the repose of his soul,” said a spokesperson for the Miri Diocese in statement to thesundaypost yesterday.

The late Fr Hermann was born on Jan 26, 1923 in Bozen, Südtirol, to Joseph Plattner and Regina (neé Kelser). Joseph was a carpenter. Hermann had one brother and one sister. He did his secondary education in Bozen even though his parents moved to Deutschofen at the beginning of the Second World War.

He later studied Philosophy in St Joseph’s Missionary College, Brixen from 1943-1945. He took his Temporary Oath in March 1944. Then Hermann was recruited into the army as an interpreter for German and Italian forces and served for one year.

He renewed his Temporary Oath in October 1945 when he returned to Brixen to continue his studies in Theology until 1947. Hermann entered St Joseph’s College, Mill Hill in September 1947 to finish his Theology. He took his Perpetual Oath in 1948 and was ordained to the Missionary Priesthood on July 10 1949 in Mill Hill.

After ordination Hermann’s first appointment, in 1949, was to the Apostolic Prefecture of Sarawak and he served in Sarawak for the whole of his missionary life ‘ad Gentes’.

Later in 1949 he was appointed assistant priest in Kanowit. For the next ten years Hermann also served as assistant priest in Kuching, twice, and Seria (Brunei). In 1959 he became Rector in Bintulu where he stayed for ten years. He left Sarawak for his hometown in Italy in May, 2000. Hermann celebrated his Silver, Ruby and Golden Jubilee of priestly ordination in Sarawak and his Diamond Jubilee in Brixen in 2009.

May your souls rest in peace, Father Hermann.