Cash and smiles from sago palms 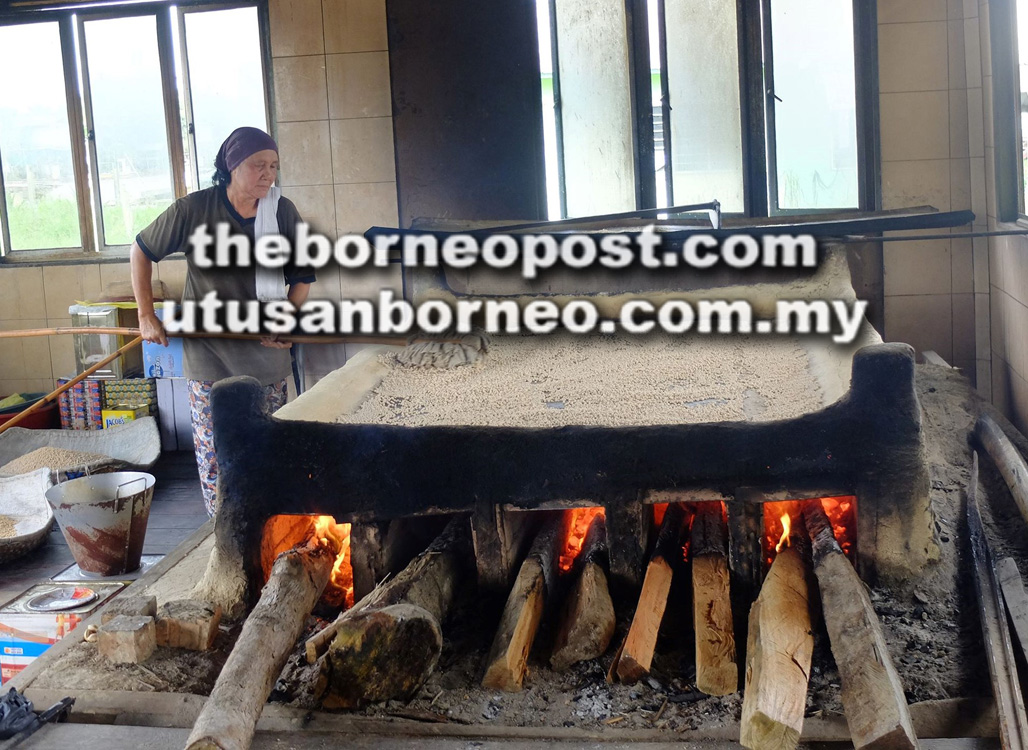 A woman roasts sago pellets in a wood-fired kiln.

WHEN first introduced to Usup Pak, I was impressed by his Melanau mannerisms and good spoken English.

He is a true Melanau who eats fish but no rice and snacks on sago pellets.

“I only have to eat a few of the tiny sago pellets, and I know where they come from. Mukah, Dalat, and Oya sago pellets all have a very distinctive aroma and taste. Those of us born and bred in the coastal regions know our treasured sago,” he beamed.

Usup’s affinity for his Dalat roots and love for sago pellets piqued my interest to know more about the coastal regions of Sarawak and before I knew it, I was bound for Mukah, Oya and Dalat with a friend on the unique DIY Four Day-Four Towns-Three Rivers Sarawak Trail.

Sago pellets refer to the tiny crunchy, fresh, and aromatic pellets made with desiccated coconut, sago flour, and rice bran.

This cottage-industry product is served at meals by the Melanaus in place of rice. 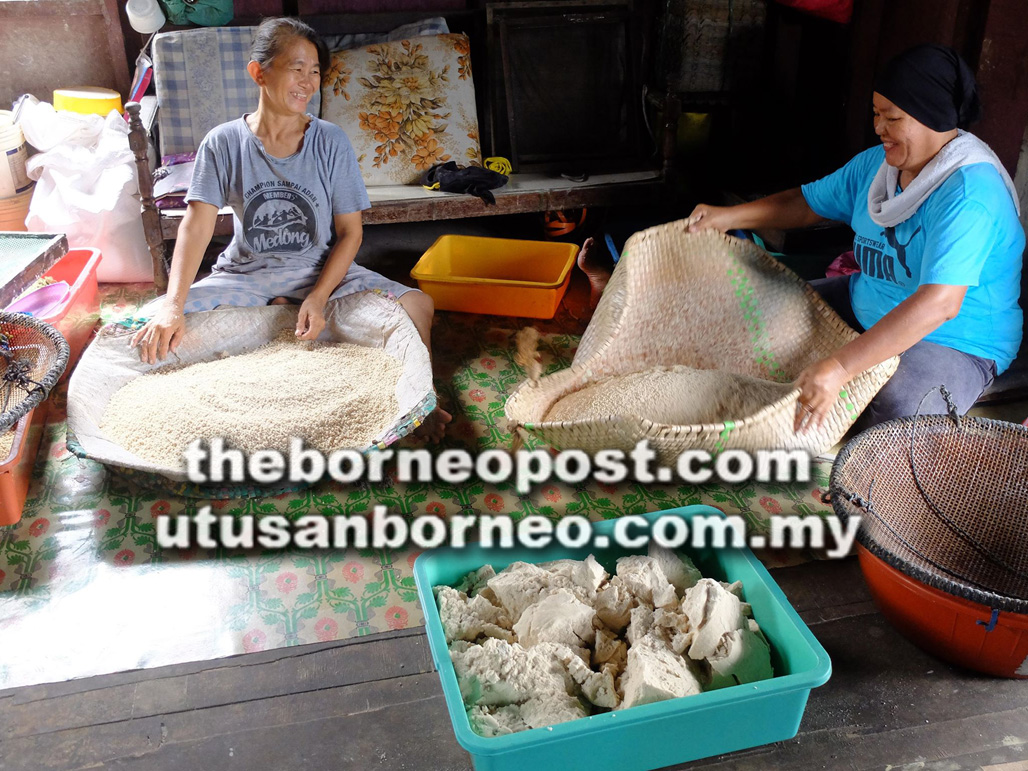 Sagun is a sweet mixture of sago flour and desiccated coconut with lots of sugar packed into a small paper tube, enjoyed especially by children.

Sago pearls are tiny white little balls made of the finest processed sago flour and used for desserts and sweet drinks.

Sago flour is made of sago palm pith and factory-produced.

Usup’s stories about umai, prawns, and other local foods are an excellent introduction to the culture of the Melanaus. His hometown Dalat is the administrative town of Dalat District in Mukah Division.

Sarawak is unique in Malaysia as it is demarcated regionally into divisions. Other states have districts and sub-districts as part of their administrative systems.

A school English text ‘How Dalat Got Its Name’ by Heidi Munan relates the attempt by three brothers to wage a succession war to gain chiefdom, resulting in many casualties.

The remains of the victims attracted swarms of flies to the village. Dalat means fly in Melanau. 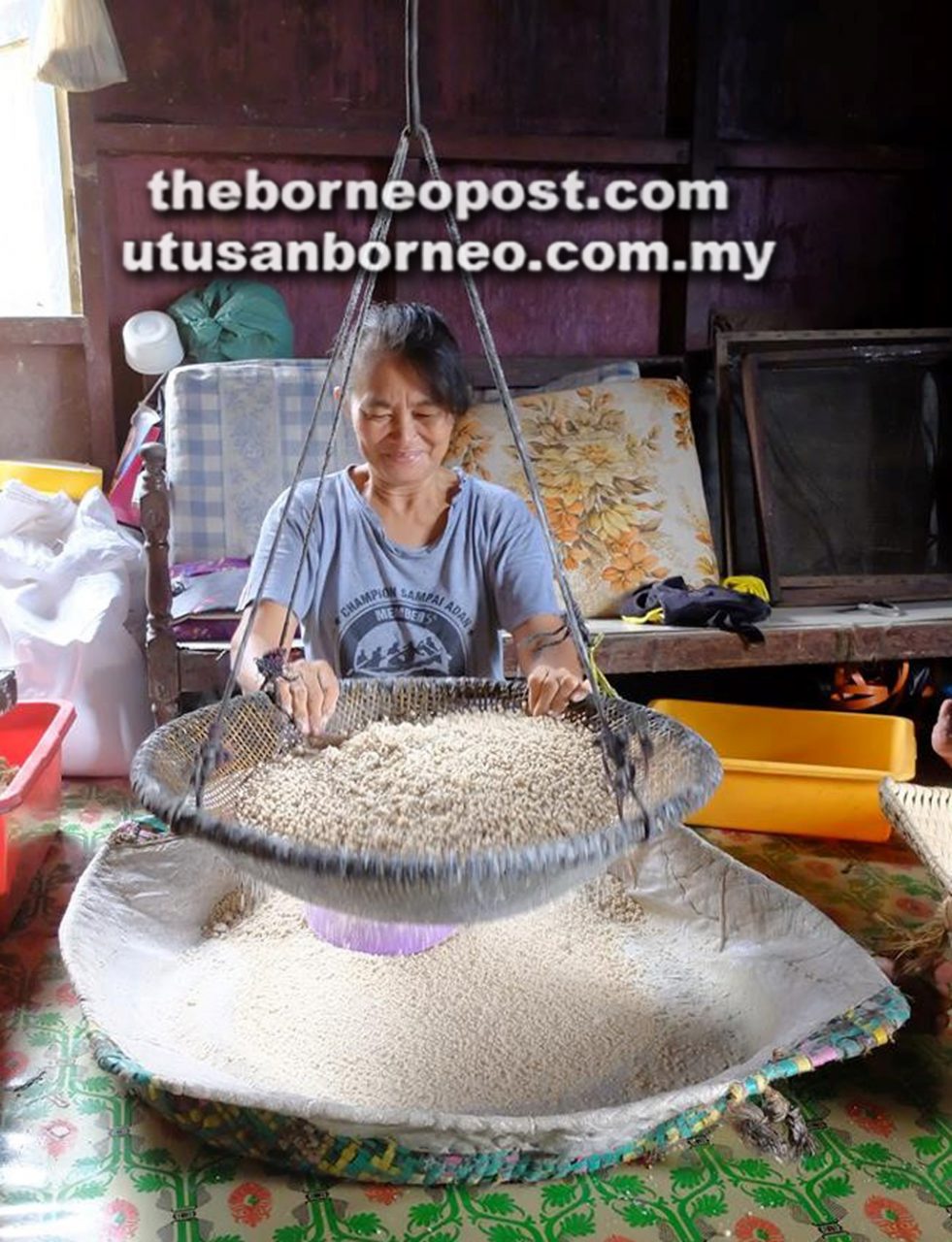 That’s how sago pellets are made – by rolling and sifting them through a flat basket.

Today, however, Dalat is not known as a town full of flies but the world’s biggest sago producer, something Sarawakians should be proud of.

There are four modern sago factories in Sarawak, with a total output of more than 74 tonnes per day. When you drink bubble tea, you must remember the soft balls are likely made of sago flour from Sarawak.

Sago flour is also the hidden ingredient of many world products such as sago-rice vermicelli, flour for fried chicken, sauces, as well as other local and international culinary delights.

“Dalat people are friendly,” a shopkeeper in Mukah told thesundaypost.

“Everyone is helpful but you must remember to have dinner before five. All food stalls and coffeeshops – in fact, most shops – are closed after that. There are no taxis here and you have to walk if you want to go to the kampungs or the riverside. For photography, walking is best.” 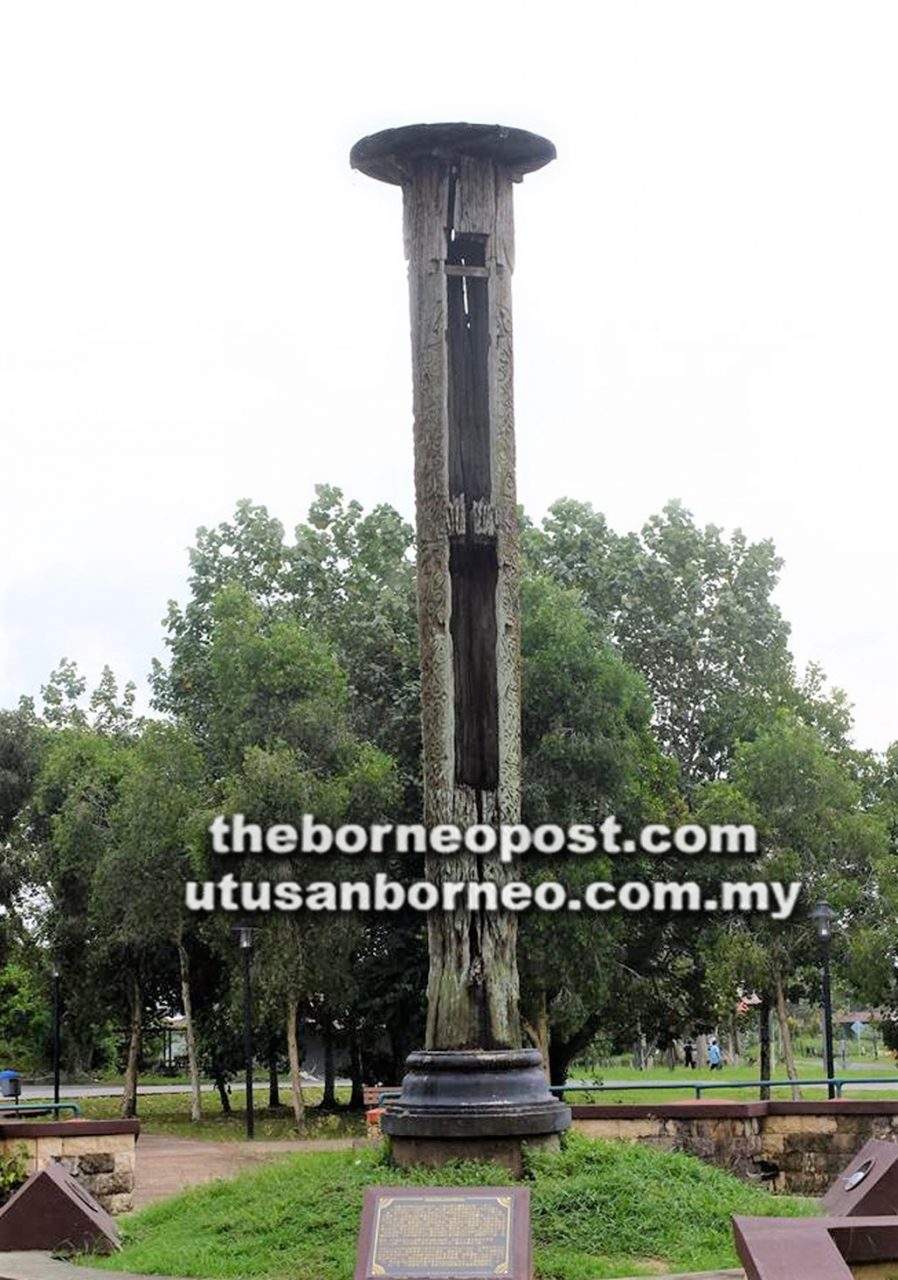 The shopkeeper’s take was spot on. We met a friendly lady named Sim, who volunteered to give us a guided tour of the sago factories.

Pretty, knowledgeable, and obliging, she offered us a ride to Medong where some of the sago factories would open their doors to visitors like us.

Speaking fluent Melanau, she helped us interview the women who demonstrated the process of sago-making. We also spent a bit of our tourist ringgit on sago pellets still hot from the stove.

However, this generational transfer of skills might be broken in the 21st century as the younger women become highly-educated and take up professions like medicine and engineering.

The pellets are made from a soft dough of sago flour, coconut milk, and rice husks. The dough is placed in a basket hung from the ceiling.

As the basket is shaken back and forth by a meticulous aunty – as if she were playing a musical instrument – little round pellets, very much like sand balls made by small crabs on the beach, start to form before dropping through the basket holes into a lower basket.

Another aunty uses a soft basket to roll the balls mixed with desiccated coconut to enhance the flavour. When the desired size is attained, the pellets are roasted over a wood-fired kiln for half an hour by a female worker, who stirs the pellets to ensure they are completely roasted.

Today, the pellets are highly prized delicacies. A big tin can fetch up to RM120 or more.

“These aunties are highly-valued sago-pellet makers, who stick to their lifelong trade. They are treasures of the Melanau community,” said Sim.

From Oya to Dalat, many of the women also make keropok. These roadside cottage industries serve a large market of different races.

As it was near Chinese New Year when we visited, these ‘foodpreneurs’ told us they were making extras to meet the demand.

With so many festive occasions in Sarawak, their business is booming. Their attractively packaged products are sold in Kuching and as far as Kota Kinabalu.

The strong sun and good sea breeze hasten the drying of the keropok in the yards. Indeed, there’s high demand for Melanau squid, prawn, and fish crackers.

Many of the womenfolk also fell and debark sago logs in Dalat.

Midah, a local landowner and businesswoman, cultivates her own sago palms. With the help of a few female friends, she would drive her own longboat early in the morning to cut down sago palms and chainsaw them into shorter logs. 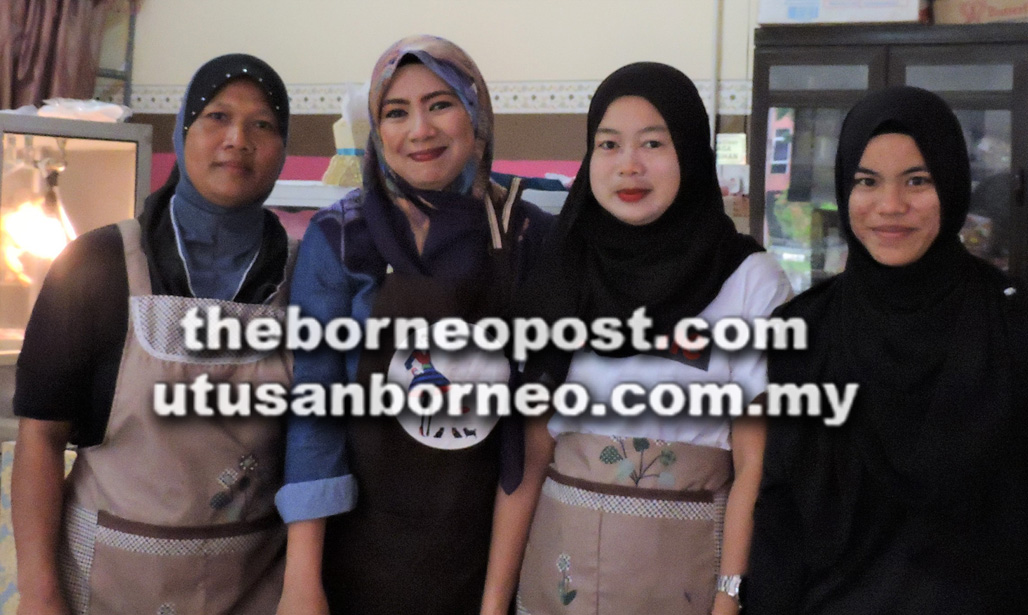 The all-women team of a halal coffee shop in Dalat.

Once the logs are stripped of their barks, the women would hook and tie them together to form a long raft to be towed down to Dalat.

And from the length of the raft, Midah can estimate how much the returns would be.

Many of the women handle their own longboats, best described as riverine four-wheel drives with 40HP outboard engines.

They take their families from across the Oya River or the kampungs further up or down river to Dalat. It’s an awesome sight to behold.

A halal coffeeshop where we ate green pandan rice was an all-women operation.

The manageress said, “The men are working elsewhere but we’re not thinking of employing young men or male school leavers. At the moment, we are happy to run things ourselves.” 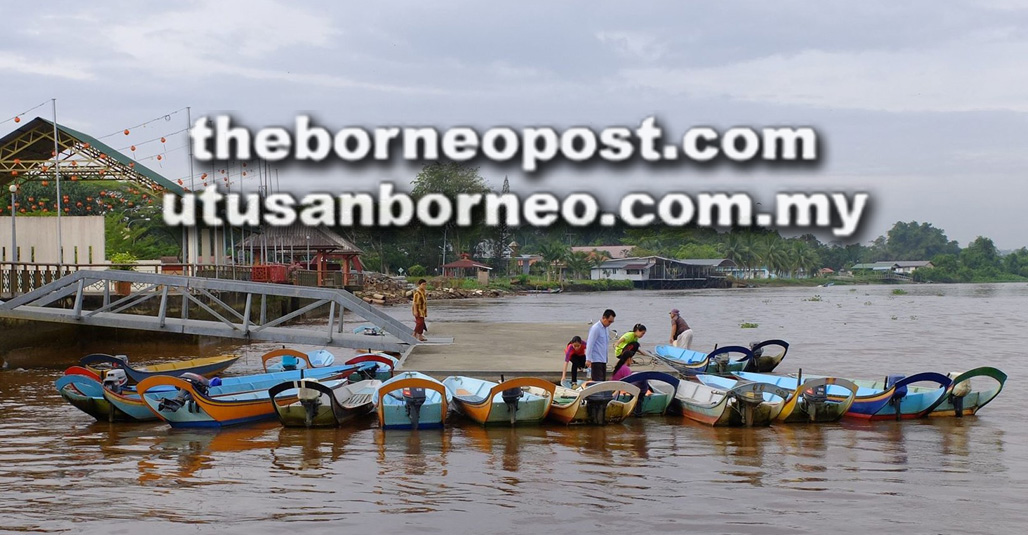 Speedboats play an important part in the life of the riverine kampung folk.

We booked a speedboat from Mukah to return to Sibu, the last leg of the four-day trail.

Interestingly, the young man who arranged the booking, said in good English, “Sure, you can just pay and get the tickets at the jetty. We have the last speedboat available at 11am and it will depart at 11.30am or when it’s full. No more speedboat to Sibu after that. Ride in comfort.”

I didn’t realise at the time all his speedboats were named ‘Ride in Comfort’.

There are several ways for the people in Dalat to travel to other parts of the country.

First, drive to Mukah for a Twin Otter flight to Sibu or Miri. Secondly, drive out of Dalat along the coastal road and thirdly, take the two-hour ride to Sibu by commercial speedboats.

But there are only two or three such options per day – and before noon.

A special monument which gives Dalat an authentic Melanau look is the kilirieng or burial pole outside the district office, directly opposite the speedboat wharf and the Chinese temple.

One of the very few old kiliriengs left in Sarawak and specially mounted in a public place is this hollow belian tree trunk with ornate carvings. It must be more than 100 years old.

According to the locals, in the old days, the kilirieng was used in rituals to prevent disasters.

Should the community be threatened, a young maiden was placed inside the pole and given only drinking water until she passed away.

It was believed the sacrifice would appease the angry spirits and prevent disasters.

The Chinese temple is one of the biggest in the coastal areas of Sarawak and dedicated to Tua Pek Kong. Worshippers believe in the protection the deity, brought across the seas to Dalat by the first immigrants.

The St Bernard’s Church is a Roman Catholic Church in Dalat. The first RC missionary arrived at the end of the 19th century and was stationed at Kampung Sungai Kut.

By 1918, a small church, a convent, and a school were set up. The Melanaus worship in their own dialect.

The Kut Canal, the only-man made channel in Malaysia, was dug by the villagers of Medong originally as a shortcut from the Oya River to Sibu via the Igan River. Later, the Sarawak government widened it.

We left Dalat feeling inspired by the many strong and hard-working Melanau women, excited by the sago palms and the sago log rafts we came across, and awestruck by the assiduous women helming powerful speedboats along Oya River.

We definitely will be back for more sago pellets, umai, local delicacies, and the warm hospitality of the Melanaus.