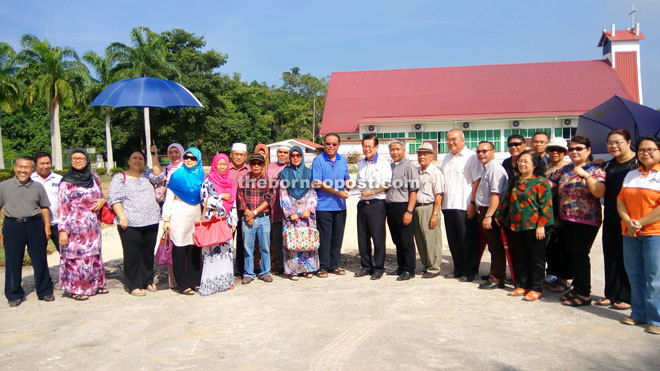 Lee (centre) receives a letter of appreciation from Ithnaini while Fr Donald (on Lee’s left), Yii (twelfth left) and others look on.

MIRI: The construction of a new car park at the compound of An Naim Mosque will further strengthen religious harmony among the faithful and Christians attending services at the Good Shepherd Church in Lutong, which is sited not far from the mosque.

In fact, the mosque committee chairman Ithnaini Bohari had requested for the project to include an entrance at the back of the church to enable easy access for church goers utilising the car park.

“The project is about half way through. We have also requested that the car park be extended from its original plan as there are still some empty spaces in the area to accommodate about 100 vehicles,” Ithnaini said when met at the project site during a visit by Assistant Minister of Communications Datuk Lee Kim Shin yesterday.

Ithnaini thanked Lee for approving the project that benefits both the mosque and the church.

Fr Donald also thanked the mosque committee for allowing them to use the car park during Sunday services and other major church events.

“We are very thankful to our Muslim brothers and sisters here who have opened their door to us.

“They have shown us the spirit of a true Malaysian as well as religious tolerance unique only to Sarawak,” he said.

Lee meanwhile praised the mosque committee for accommodating their Christians brothers and sisters by letting them use the car park.

“I am very proud to witness such religious tolerance. This should be set as a good example especially for those in the peninsular.”

He said the request for an entrance at the back of the church as well as the project expansion would be approved to benefit both the mosque and the church.

The An-Naim Mosque and the Good Shepherd Church in Lutong are located side-by-side.

They share the same car park all the years of their existence.

Muslims and Christians there have been known to get along well together especially during special occasions such as Hari Raya and Christmas.