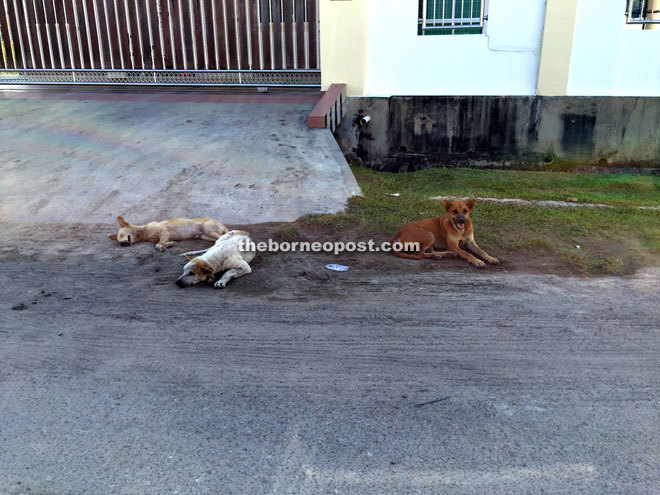 Stray dogs at a housing area. Many areas in Miri have recorded cases of canine distemper.

MIRI: A veterinarian has warned of a canine distemper outbreak in many areas here.

The veterinarian, who only wished to be identified as Chin, said pet owners should beware as the viral disease, which can spread through the air and water, has caused deaths especially among stray dogs.

“Canine distemper is a viral disease that affects a wide variety of animal families, including domestic and wild species of dogs, foxes, wolves, and large cats,

as well as pinnipeds, some primates, and a variety of other species.

“Common symptoms of the disease include high fever, eye inflammation and eye/nose discharge, laboured breathing and coughing, vomiting and diarrhoea, loss of appetite and lethargy, and hardening of nose and footpads,” he said in an interview.

Chin said if the condition becomes worse, the viral infection could be accompanied by secondary bacterial infections and present eventual serious neurological symptoms such as seizures.

“For pet canines, which were given preventive vaccines at a very young age, their immune system builds to resist such disease.

“Therefore, there’s lower possibility for them to get infected. However, delaying in giving the canines the necessary vaccines could weaken their immune system, therefore the higher possibility of them being infected with the viral disease,” he said.

concerned members of the public regarding dogs infected with the disease.

“Moreover, this is mating season for canines, when these male dogs from different area gather at one place. The viral disease could be easily spread amongst the canines.

“The situation will become worse because these dogs that return to their own areas will also bring the virus with them,” she said.