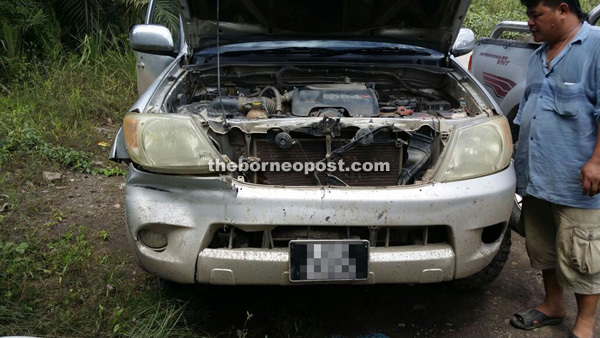 The engine of Roland’s 4WD experiencing some problems after the accident at a section between Lapok and Bukit Limau Road.

MIRI: A call has been made on relevant authorities to upgrade the rural roads across Long Lama in the interior of Baram, especially those leading to Tutoh and Long Terawan which look more like logging tracks than actual roads.

According to Parti Keadilan Rakyat (PKR) Baram branch secretary Dennis Along, the situation is getting worse due to frequent downpours and strong winds.

“Such condition could result in untoward incidents like accidents. Needless to say, it also makes many people feeling reluctant to return to their home longhouses for the Christmas holidays.

“This is very regrettable, indeed; it seems that there is no action from the relevant authorities,” he told The Borneo Post yesterday, adding that the situation in some areas were so bad that even heavy-duty vehicles like four-wheel drives (4WDs) could not handle the roads – let alone the saloon cars.

Dennis’ statement came after an accident on Thursday, where Baram PKR chief Roland Enggan was involved in an accident at a road section between Lapok and Bukit Limau Road in Tinjar, Baram.

It is claimed that the road condition at the time was slippery and the pathway had become narrow because several timber-laden lorries were obstructing the way.

Dennis hoped that the government would take a closer look at the problem and commission upgrading works on these roads as soon as possible.

“Having good roads would help in preventing accidents. It would also enable motorists to reach their destination (Long Lama) safer and quicker – within three hours instead of the current five hours,” he said.