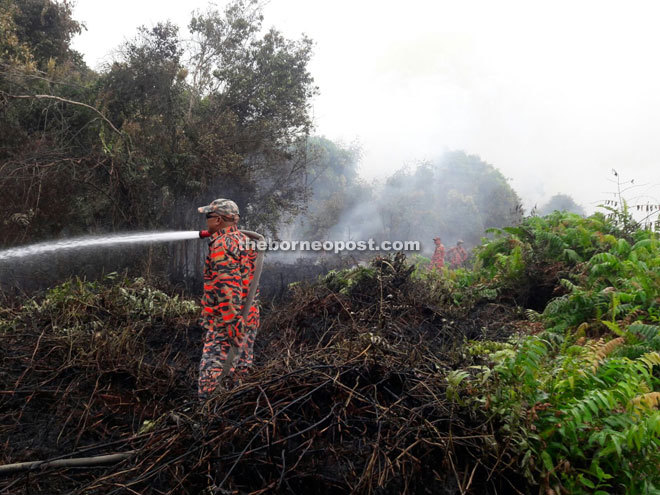 The fire has so far destroyed nearly 1,000 acres.

The Air Pollutant Index (API) reading at ILP Miri at 1pm yesterday was 260.

Law, when contacted yesterday, said 35 of his men were working tirelessly together with 23 volunteers from Naim Cendera to douse the flame.

Law added that the air unit had sent 12 men and a helicopter to water bomb the affected area.

While we tackle the smoke, we advise residents living near the area, in particular those in Senadin, Permyjaya and Tudan, to reduce their outdoor activities and drink plenty of water,”

Residents living near ILP Miri have been complaining about thick smoke and the hazy situation the past few days.

Many of them urged the relevant authority to punish those responsible for causing the fire.

Meanwhile, Bernama reported Human Resource and Environment Minister Dato Sri Wan Junaidi Tuanku Jaafar as saying that ILP Miri was ordered to close yesterday after the air quality there reached the hazardous level yesterday morning due to haze from a fire.

Wan Junaidi had informed the Department of Environment (DOE) to instruct ILP to close immediately.

“We will also inform the Education Department to

advise schools in the vicinity affected by the haze to close,” he was reported to have said when contacted.

I could feel the dry and burning sensation inside of my nose when I finished my morning exercise at the park this morning.