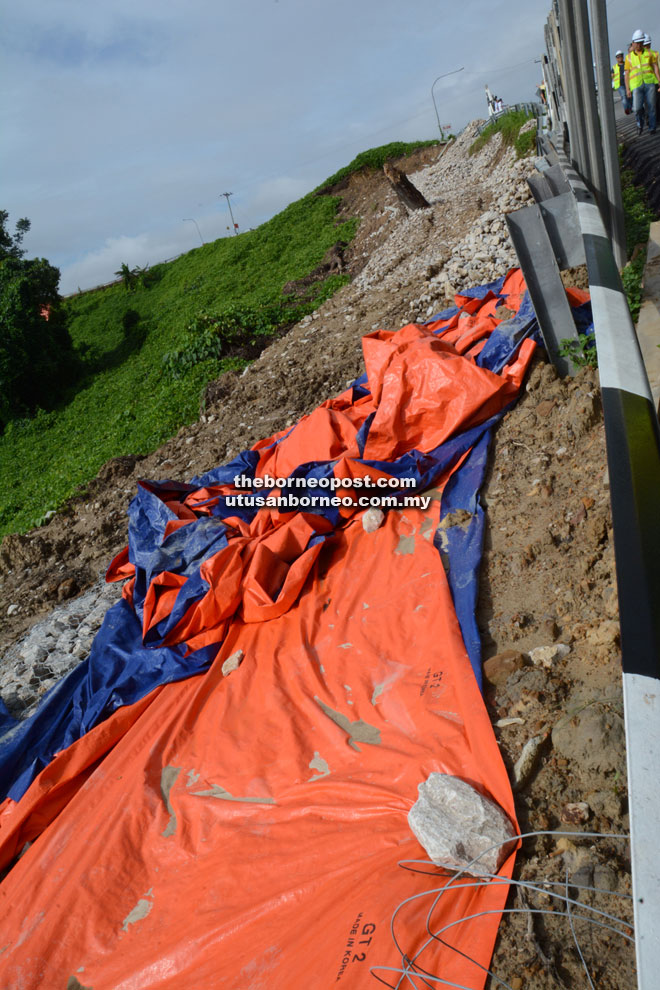 Canvas is used to temporarily cover the soil erosion. 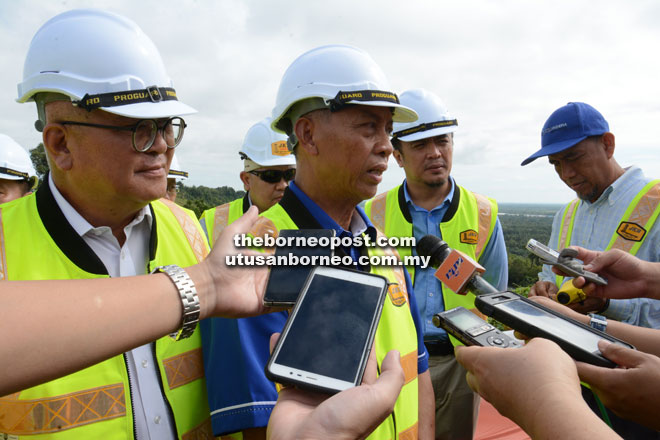 Dr Penguang (second left) and Yii (left) speaking to reporters after visiting the site of the landslide at Canada Hill yesterday.

MIRI: Bunds and sand bags will be used as a temporary measure stop soil erosion at Canada Hill from getting worse by diverting and controlling the amount of water from flowing in through the soil, says Assistant Minister of Local Government Datu Dr Penguang Manggil.

“After being briefed by the experts, we were made to understand that to tackle the situation, it would be wise to do it from the root cause. The geography here is, however, unlike the other areas, and we never know how it was before.

“Reaching a conclusion or saying what we are going to do would be too premature, but suffice to say that details throughout the investigation will be unveiled,” he said during a site visit to Canada Hill yesterday morning.

Experts from the Public Works Department (JKR)’s Slope Engineering Branch in Kuala Lumpur, mayor Adam Yii, councillors and Miri City Council staff were at the site to check on the damage caused by the erosion.

One of the experts said the temporary measure is to halt the erosion before a permanent solution to the situation is implemented.

“The erosion occurs at a lower part with water coming from high ground.

“The erosion is the result of overflow of water from all places into one, and overflowing into the soil, weakening the grip and resulting in the erosion. Therefore, diverting the water from the site is the first step to reduce the damage,” said the engineer.

Dr Penguang, on the other hand, said finger-pointing would not solve the problem.

“For now, our main focus is to manage the slope failure and minimise the erosion to possibly reduce any damage. Therefore, credit for all the hard work should go to all relevant authorities including JKR at state and federal level, as well as the city council.”

At the same time, Dr Penguang urged developers and local authorities to take extra precaution to avoid any untoward incident.

“The incident that happened here many years ago, when the slope behind a fuel station opposite Bintang Megamall collapsed, was a very expensive lesson to learn and I am sure that no one wants a similar incident to happen again.”