Passengers arriving on a late night flight to Bruneian capital Bandar Seri Begawan were caught by surprise as they experienced a waterlogged arrival hall at the Brunei International Airport following heavy rains around 11pm yesterday. The oil-rich kingdom, in an attempt to flag itself as an aviation hub on Borneo island, recently completed a US$111 million dollar major redevelopment, upgrade and modernization programme of its airport terminal.

Fire and Rescue personnel arrived at the scene and mopping up work was conducted to reduce the impact of the flooding, with some passengers taking snapshots of the flooded arrival hall. The flooding gradually receded after midnight and normal conditions were restored on 2am. 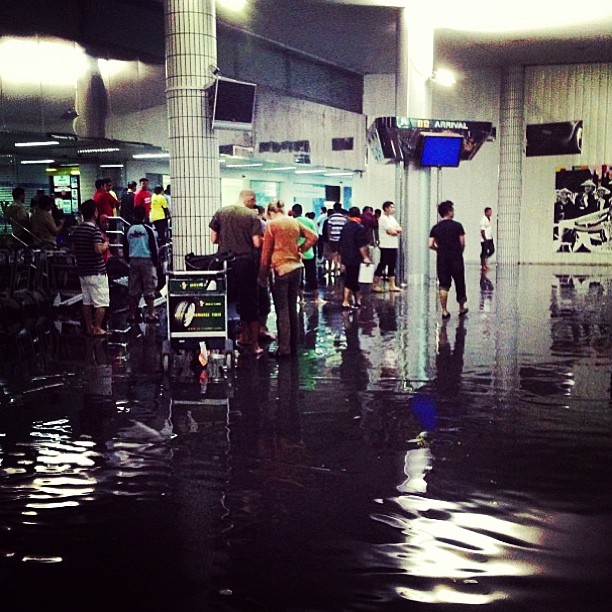 Not much details have been reported as the Bruneian authorities are reluctant to give further comment on the incident. The Airport Modernization Project Team had identified the cause of flooding being the ingression of water through the existing sump/outlet within the arrival hall. The Department of Civil Aviation (DCA) and the Brunei Economic Development Board (BEDB) say they will be carrying out remedial measures to avoid such incidents from happening in the future. Both BEDB and DCA would like to apologize for the inconvenience experienced by the arriving passengers and their family members as well as other airport users.

Brunei has the least tourist arrivals in ASEAN at 250,000. Its airport handled an approximately 1.6 million passengers last year, putting it below that of neighboring Miri Airport. The Brunei International Airport consists of an international terminal which can handle up to 2 million passengers, a cargo terminal with a capacity of 50,000 tonnes of cargo and a royal terminal for the Sultan’s exclusive use.

Aiyo… some poor foreign engineer is going to get his contract terminated and sent packing, finger pointing a fall guy is the norm when accountability rest with the contractor whereas the state appointed executive can do no wrong. :mrgreen:

Cant even handle heavy thunder showers! what more tourist arrivals into that country

seriously their airport facilities is so lauzy…its not like the government doesnt have any resources to rebuild it and it is the only airport in their country.

I didn’t check. Miri airport ever had history of flooding?

main factor is becuz their sultan is using the other airport beside the 1 others are using tats y they don spend on the common terminal tats y n the common airport doesnt handle much passenger.from wat mevo posted miri airport is handling more passenger than brunei airport.

main factor is becuz their sultan is using the other airport beside the 1 others are using tats y they don spend on the common terminal tats y n the common airport doesnt handle much passenger.from wat mevo posted miri airport is handling more passenger than brunei airport.

the picture which you see above is the old terminal, their are building a new terminal beside, from the look at it, it seem very nice, can’t wait to see the completed version.

I didn’t check. Miri airport ever had history of flooding?

no i dont think so, last there was a flood infornt airport road because of clogged drains but it not inside…

maybe once fully completed the airport will look better.

avoid the fast food outlet there. Miri’s is way better.

Somehow, those picture reminds me to old Kuching airport.