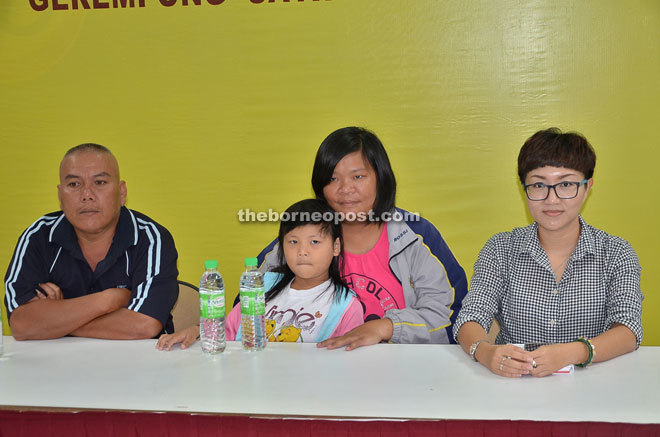 (From left) Bong, Lau and their child with Tnay at the press conference.

Lau Hui Ching, whose husband Bong Chee Ping is suffering from a heart problem and unable to work, expressed her gratitude to Chiew and Lo for their generous help to her family.

As such, she hoped that there would not be any issue or argument over whose help came first.

“I hope for all this (argument) to stop,” Lau said during a press conference, set up by SUPP Women advisor Amy Tnay at the party’s headquarters here yesterday to counter allegations by Chiew against Lo on the delivery of aid to Bong’s family.

Last week, a news report highlighted the plight of the family, stating that they had sought help from Chiew but things did not work out.

The article then said in the end, they received the welfare aid through Lo’s help.

As a result, DAP’s Chiew challenged SUPP’s Lo to show all the documentation on the welfare application to prove that he was the one who helped the family.

The couple has six children — their eldest child, aged 18, is a person with special needs.

According to Lau, they were living in Miri before moving here in 2010.

They then sought Chiew’s help to apply for welfare aid and also for low-cost housing programme based on their eligibility as hardcore poor family.

“We were staying in MJC (Batu Kawah New Township) while waiting for the approvals. Both Chiew and Lo had visited and helped us at the time.

“When we received the approval for the PPR (People’s Housing Programme) unit in Batu Kawah, Lo came and helped us move in, and also gave us some money.

“Tnay had also visited us and gave our son a wheelchair,” Lau said.