‘Bonsai cultivation can be affordable for beginners’ 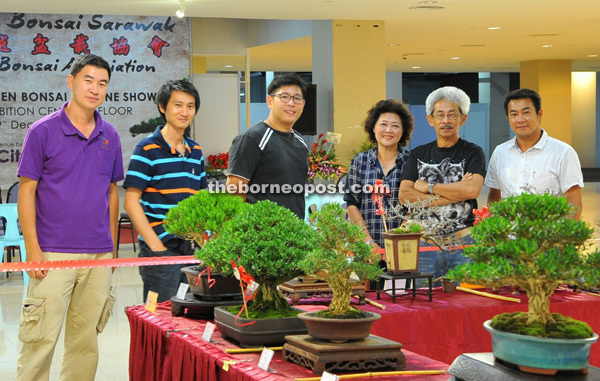 Jong (second right) is seen with other bonsai enthusiasts at the 12th Sarawak Bonsai and Stone Show.

KUCHING: Contrary to popular belief, it is not overly expensive to start bonsai cultivation.

Sarawak Bonsai Association president Johnson Jong said the starting cost ranges between RM200 and RM300, depending on the type of plants used.

“Any plant with small leaves can be turned into bonsai, to give it the effect of looking like an ancient forest tree. Plants with large leaves will look very odd and do not create the same effect,” he said when met yesterday.

“The real cost is time, as cultivation takes time. It will take up to eight or nine years to see the result of bonsai cultivation.”

Jong said the association usually holds a competition and exhibition at the end of the year, adding the12th Sarawak Bonsai and Stone Show last month drew a fairly good response.

“A total of 112 pots of various sizes, from miniature to large, were exhibited. For this year, we are expecting to see a lot of new plants. Members have improved their cultivation skills and many are on standby for this year’s show,” he said.

Jong said the Sarawak Bonsai Association currently has around 50 members, many whom are based in Kuching.

“There are bonsai associations in Sibu and Miri too, and we usually take part in each other’s events.

“Unlike some associations in West Malaysia, many of our members are young, in the 20s and 30s age group.

We are actually thinking of organising a roadshow to introduce the hobby to more youths,” he said.

Members also get to take part in bonsai tours overseas to network with fellow bonsai enthusiasts and to learn about bonsai cultivation in other countries.