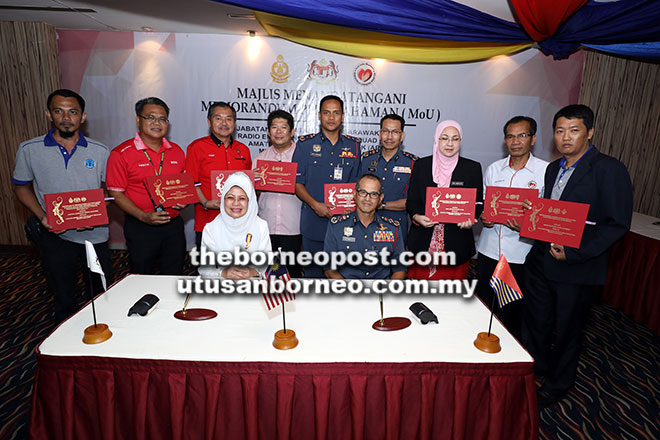 KUCHING: The state Fire and Rescue Department (Bomba) has signed a memorandum of understanding (MoU) with state Health Department and four organisations to further improve its services.

State Bomba director Nor Hisham Mohamad said the four organisations had been supporting Bomba in various ways and the MoU was an expression of Bomba’s appreciation for their support and contribution.

He said with the signing of the MoU, Bomba looked forward to strengthen its close relationship with all of them.

Nor Hisham said under the MoU with the state Health Department, Bomba may station its ambulance at the hospitals if the need arises.

“On the other hand, if we need medical care, we can apply to the department to send their staff to be on standby at our station and be attached with our team during an emergency,” he told a press conference here yesterday.

In addition, Nor Hisham said, they had also agreed to have online advisory service.

Citing an example, he said the service would allow Bomba to seek advice on treatment from the Medical Command Centre (MCC) when attending to a patient during an emergency situation.

Besides that, under the MoU, the medical department would conduct special pre-hospital courses for Bomba staff, he added.

“To operate an ambulance, we have to be competent, which is something different from our main task – that is doing fire fighting.

“But now we want to do emergency pre-hospital care. We thank the medical team which had conducted special course for our staff.

“Currently, we have 230 officers who have completed their special course. After the course, they were attached to five hospitals in Sarawak for 120 hours,” he said.

On the MoU with the amateur radio clubs, Nor Hisham said they were significant to Bomba as it often faced communication problems when they were at disaster sites.

“The MoU with them will support us especially in the communication aspect,” he said, adding Bomba needed their services to disseminate information about the situation on the ground.

As for the MoU with REDS, Nor Hisham said the use of drones is very effective in locating the actual scene of a disaster or to trace victims in places that cannot be reached by road or by boat.

“At the same time, Bomba will help them in terms of logistics, transportation, shelter and cost related to the drone operation,” he said.