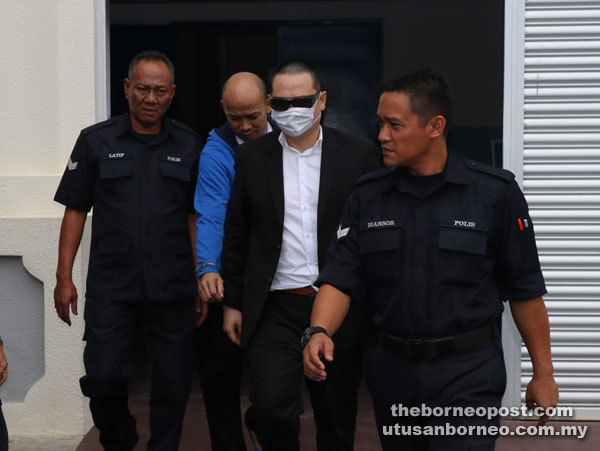 He was charged under Section 109, read together with Section 302 of the Penal Code, which provide for the mandatory death sentence upon conviction.

According to the brief facts of case, Lee and three others – Lie Chang Loon, 37, Chin Wui Chung, 50, and Kong Sien Ming who is still at large, were charged with abetting Mohamad Fitri Pauzi, 29, in the commissioning of the murder of the PKR activist.

Mohamad Fitri, a car re-possessor was charged on July 15 with murdering Bill Kayong at the traffic light intersection near E-Mart Supermarket in Tudan, Miri-Kuala Baram Bypass, at 8.20am on June 21, last year.

He was charged under Section 302 of the Penal Code and faces the mandatory death sentence upon conviction.

Deputy public prosecutor Noor Fadzila Ishak told the court that all the related documents on the case had been given to the lawyer of the accused, who is represented by David Kuok.

Kuok meanwhile, confirmed receiving the documents on behalf of Orlando Chua, the accused lawyer, who is currently on a three-week sick leave overseas, after a shoulder operation.

Kuok said Chua would only be back in Malaysia (Miri) on Jan 8 and thus needed more time to study the documents to prepare for the defence.

Kuok also requested the court to fix Jan 9 for further mention of the case involving Lee, charged with the murder of Bill Kayong, which was later granted by the judge Dr Alwi Abdul Wahab.

They were then ordered to be further detained at the Central Prison in Lambir while awaiting trail.

The murder of Bill Kayong is believed to be in relation to a long-standing dispute between the plantation company headed by Lee and native landowners whom Bill had been representing.

Bill also contested on PKR ticket in the Bekenu state constituency, but lost to incumbent Rosey Yunus during the last state election.

The broad-day light murder sent shock waves among Mirians and the authorities sprang into action to nab the suspects, including the prime suspect, Lee, who flew to Singapore on June 23, two days after Bill’s fatal shooting.

State CID chief SAC Dev Kumar recently reported that investigations had discovered that Lee then flew to Melbourne, Australia from Singapore on July 3 and thereafter to China.

With Interpol assistance and the Ministry of Public Security, China in Putian, Fujian Province, Lee was deported from China on Dec 12, and subsequently apprehended at Kuala Lumpur International Airport (KLIA) at 7.45pm on Dec 13

Lee was subsequently charged in a Magistrate’s Court here on Dec 14, as the mastermind behind Bill’s murder.