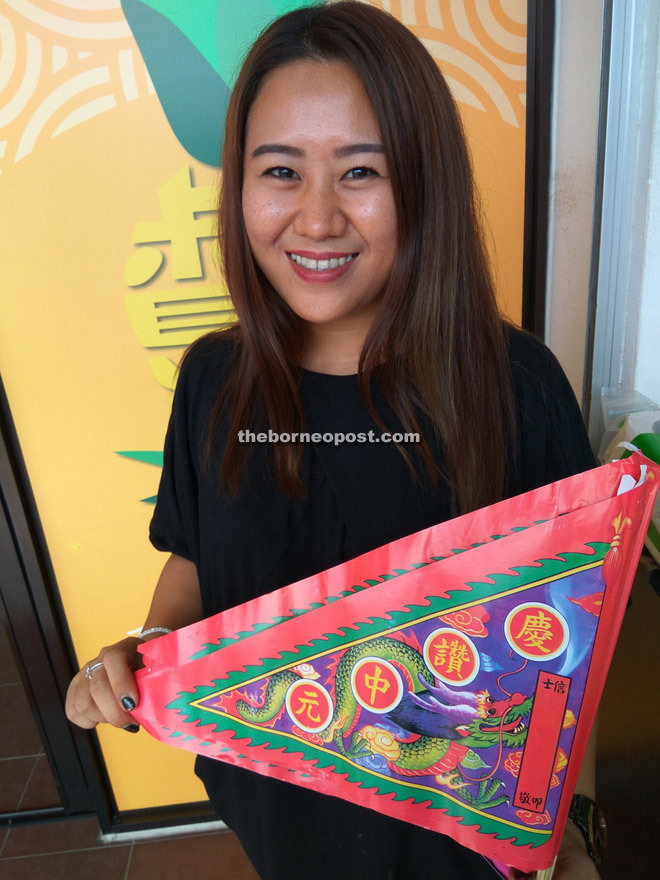 Tan shows a set of colourful triangle flags, used to direct the ‘hungry ghosts’ to where the hell notes and food are.

MIRI: In two days – the 15th day of the seventh month of the Chinese lunar calendar – the ‘Gate of Hell’ will open, letting all the ‘hungry souls’ out into the earthly realm.

Believers will light up their joss sticks, burn ‘hell notes’, and offer food to these hungry ghosts.

“Although this tradition has been passed down from our ancestors, there seems to be a trend among the people, especially the young ones, to confuse it with other

“The main focus of Hungry Ghost Festival, or ‘Zhong Yuan Jie’, is to offer food and other items to those souls who are not worshipped by their loved ones.”

She said since the first day of the seventh lunar month, the ghosts had already been wandering the earth.

“But it is on the eve of the 15th day that the ‘Yin’ energy (what spirits are supposedly made of) is the strongest – so strong that those who have weaker ‘Yang’ energy, or luck, are urged stay indoors at night.”

Tan said every ritual and offering made during the ‘Hungry Ghost Festival’ had its own meaning.

“Usually, hell notes are burned at roadsides, together with other offerings. Colourful triangle flags are put right next to them to ‘signal’ the wandering spirits that there are ‘money’ and ‘food’ for them. The joss sticks serve to let the spirits ‘taste’ the food being offered.”

Tan said for worshipping, believers were usually advised to use green joss sticks.

Tan explained that another focus in the worshipping during the festival was to pray for safety and better luck.

“When praying, it is wise to not utter nonsense, such as saying that ‘ghosts are not real’. This can anger the ‘good brothers’. It is best to show respect to each other – between man and spirit.”

Tan said apart from giving offerings, other rituals would also be performed to make the ghosts happy.

“This is deemed good for the believers’ luck and career.”

On the sale of items for ‘wandering spirits’, Tan claimed that the sluggish economy had affected her business.

“The number of customers may remain the same, but the amount of items that they buy is less than