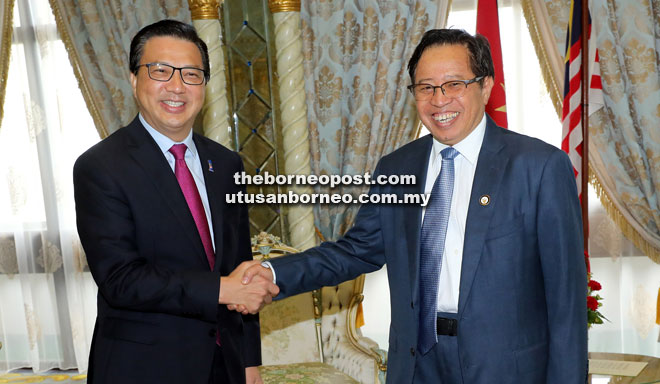 Liow (left) greets Abang Johari with a big smile before they proceed to discuss the development in the transport sector in Sarawak. (File Photo)

KUCHING: The Ministry of Transport is in the process of reviewing Rural Air Services (RAS) to improve access to rural and remote areas of Sarawak.

Its minister Datuk Seri Liow Tiong Lai revealed that RM190 million in subsidies were allocated for RAS operations in Sabah and Sarawak per year.

“We are aware of the need to improve access to air services in rural Sarawak because there are a lot of far-to-reach small towns from the city and it is quite risky to use helicopters,” he said.

“So we will further expand the RAS operations but now we are in the process of reviewing the whole RAS in Sarawak,” he added.

Liow highlighted that this was among the issues on development in the transport sector discussed during a courtesy call on Chief Minister Datuk Amar Abang Johari Tun Openg at his office in Wisma Bapa Malaysia here yesterday.

The ministry, he continued, was looking into the whole package of MASwings services in the state to see which routes still need subsidies and those that can be cut.

“Now we are allowed to take away the subsidies for some of the destinations like Kuching to Sibu or Kuching to Bintulu as those are plied by commercial airlines like AirAsia and we also allow some other private airlines to take the routes,” he elaborated.

“So we will ask MASwings to focus on rural and remote routes like Ba Kelalan, Bario, Kapit, Miri and Bintulu. These will be the priority rural routes that will be provided with subsidies,” he said.

The subsidies, he added, were allocated each year to help rural towns as land transport took too long as well as to boost economic growth in Sarawak.

“I am confident with this review of RAS, we will have better coverage and the Chief Minister has indicated that he wants additional remote areas covered like Sadok near Betong,” he said.

Liow assured that the review would take into consideration the wish list of the state government as the ministry was committed to improving the RAS in Sarawak.

Meanwhile, it was reported in March and April this year that MASwings Sdn Bhd would continue to run RAS across Sabah and Sarawak for another seven years.

The extension, taking the contract to 2024, had been approved by the Cabinet and was aimed at minimising disruption of RAS.

RAS provides scheduled commercial flights to rural areas in Sabah and Sarawak. It is solely operated by MASwings under contract with the Federal Government.

The report also revealed that MASwings operates a fleet of 16 turbo-prop aircraft to provide scheduled passenger services to 49 remote towns and villages in Sabah and Sarawak.

The routes operate in 10 airports and 14 airfields in Sabah and Sarawak.