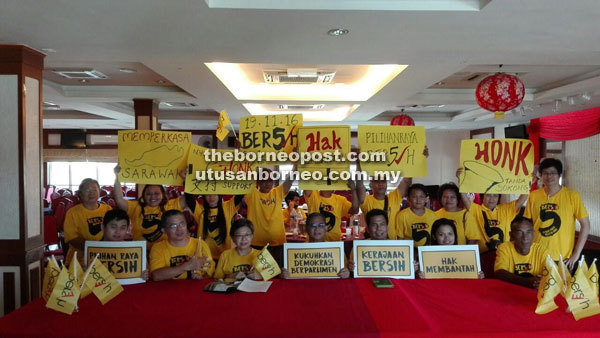 At a press conference held recently in Sri Aman, the election watchdog said the rally would be held simultaneously with Bersih 5 Rally in Kuala Lumpur.

The press conference was called to introduce the non-governmental organisations (NGOs) and groups involved in the Bersih 5 Convoy and Rally organising committee.

“We hope that we can use Padang Merdeka. We want to emphasise that all we want is to assemble peacefully. We’re just a coalition of Malaysians and Sarawakians who want to seek the truth and justice for all and the generations to come. As organisers, we will try our best to maintain the safety of our rally participants. We also do not want any incident happening to those participating in our rally.”

Nevertheless, Bersih Sarawak said they had high confidence in the authorities to cooperate and carry out their duties with the utmost responsibility, especially the police in taking care of the safety of participants.

“We urge all Sarawakians to join the Bersih 5 Rally in Kuching on Nov 19. We, as a people, must unite and continue to demand for change. We must not give up this fight. Therefore, Bersih Sarawak welcomes any participation including from the ruling and opposition parties who wish for a developed, clean and prosperous nation.”

Bersih Sarawak is demanding for reform in the governance of the state, besides echoing Bersih 5’s demand for institutional reform for a new Malaysia such as clean government, strengthening parliamentary democracy, the right to dissent and strengthening Sabah and Sarawak.

“The issue of native customary land is vital in Sarawak. Customary land is a fundamental right for the indigenous peoples. This is because their land is the source of their income. Without such land they lose their livelihood.”

“Money politics is one of the things that destroy our electoral system. Therefore, we must continue to fight against it. The electoral system should allow every citizen to make their own choice of candidate without being affected or threatened by any party.”

They demanded the government to strengthen election laws and reform the Election Commission (EC) to enable it to act freely and transparently, enforce election laws against offences such as bribery and treating, amend the Election Act to limit election and political contribution and strengthen EC’s power in monitoring and enforcement of the election law and cooperation between Malaysian Anti-Corruption Commission (MACC) and other relevant agencies to fight corruption in elections.

Besides that, Bersih Sarawak stated that for a balanced and fair government, power should not be concentrated at the federal level and state governments, especially in Sarawak.

“We feel the Sarawak Chief Minister Datuk Patinggi Tan Sri Adenan Satem’s rhetoric policy would not bring benefit or solution to the people’s problems. The power of government is from the people and should be held by the people. Therefore, we demand the return of local government elections.”

Considering that advanced facilities were often concentrated in urban areas such as Kuching, Miri and Bintulu, leaving the rural areas behind, Bersih Sarawak demanded that the government develop infrastructure in rural areas.

“We want all the people in Sarawak to enjoy balanced development without alienating anyone. The government should develop the infrastructure and basic facilities such as roads, water, electricity and telecommunications in rural areas as well as develop rural industries in order to create more job opportunities.”