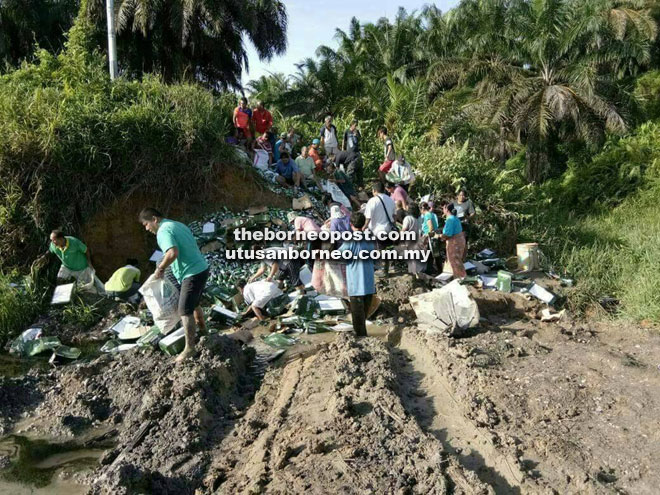 (Left) A photo circulating on social media purportedly of villagers collecting beer cans at the scene of the accident. 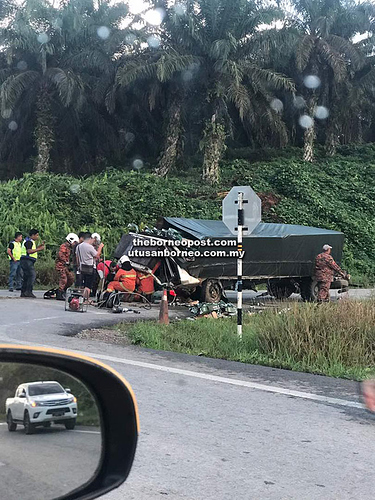 (Below) Firemen in the process of extricating the trapped lorry driver and his attendant at the accident site.

MIRI: A crash involving a three-tonne lorry laden with hundreds of cartons of beer at Bukit Peninjau, near Bekenu early Monday morning left the driver and his attendant pinned to their seats.

A Fire and Rescue Department (Bomba) spokesperson said firemen were dispatched to the scene following a call received at 5.22am.

“Upon arriving at the scene, firemen found the lorry driver and his assistant pinned to their seats, and immediately began the process of extricating the pair,” the spokesperson said when contacted yesterday.

The victims only suffered light injuries in the incident.

It is learnt that the lorry was travelling towards Beluru when the crash occurred.

The incident resulted in viral posts on social media carrying photos purportedly showing local villagers rushing to collect what was claimed to be thousands of cans of beer spilt from the lorry following the mishap.

However, Marudi police chief DSP Gabriel Risut said no one complained about the beer-gathering incident.

“No report has been lodged, but I have asked my men to check it out,” he said when contacted.

A source said there was nothing left at the accident scene except for empty beer boxes.

“There were no beer cans at the scene except for empty boxes which were left there.”