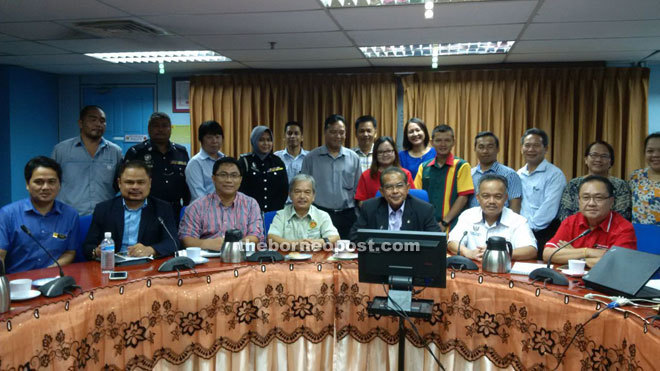 (Seated, from second right) Antonio, Paulus and Maria Hasman join other committee members for a group photo after the meeting.

MIRI: The annual Pesta Bebulang will return next month, promising a host of exciting activities including the much-anticipated highlight — the traditional buffalo race.

Sarawak Bisaya Association (PBS) will be hosting the grand harvest festival in Batu Danau, Limbang from June 10 to 12.

“Other exciting events that we have lined up include the ‘Miss Agak Asal Babulang’ beauty pageant on June 11, a number of cultural performances, a football match, run, a bodybuilding contest, remote control boat race and open house gathering.

“We welcome all to come and enjoy the festivities with us throughout the three days,” said Miri Resident Antonio Kahti Galis, who is also PBS president, when met after chairing a meeting in Limbang yesterday which was also attended by Batu Danau assemblyman Paulus Palu Gumbang and Limbang Resident Datu Maria Hasman.

Pesta Babulang is a celebration of the Bisayas — one that marks the end of harvesting season and the beginning of the next planting cycle.

According to Antonio, the festival is the most significant among all celebrations observed by the community.

“It is more about giving thanks for the bountiful harvest. As far as the Bisayas are concerned, the festival is not complete without the buffalo race,” he said, adding that in the old days, the occasion was only observed among family members and close friends.

“It has evolved. In 2004, PBS engaged with the relevant authorities in the state, including Sarawak Tourism Board, in helping to promote the festival. Since then, Pesta Babulang has been celebrated on a grand scale every year, and we

welcome all communities to come and share the occasion with us,” said Antonio.

The Bisayas can be found in most parts of the state’s northern region, with a large concentration of them living in Limbang. Some also reside in Sabah and Brunei.