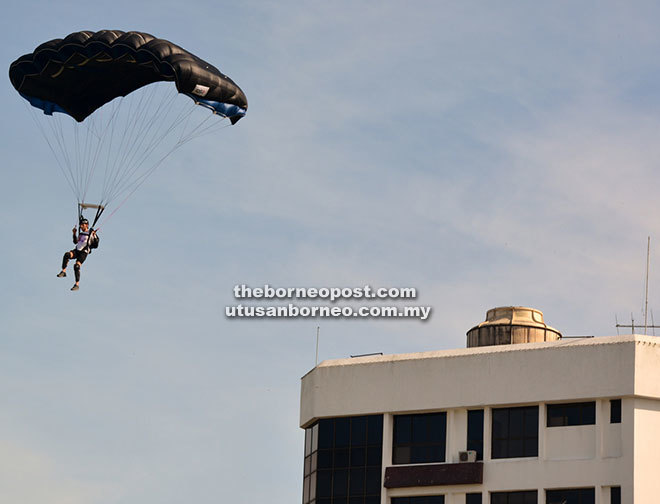 A jumper navigates his way to the landing area at Sibu Town Square Phase 1.

SIBU: While it is thrilling to watch BASE jumpers making the plunge from high buildings, it is certainly no ‘child play’ as it requires superb skills and good timing because they have only a short time before touching ground.

According to Malaysia BASE Jump Association president Captain A. Aziz Ahmad, it is recommended that potential jumpers do certain amount of sky-diving for a start.

“We are talking about mental conditioning, where for BASE jump, jumpers make use of only one parachute while jumping from the aircraft they use two parachutes. Jumpers must know how to operate their chutes, where from the aircraft, they will have more time from about 4,000 feet up in the air before landing – this takes about five to six minutes.

“You will have more time to understand how the parachute works. But this one (BASE jump) from here (top of Wisma Sanyan) to there (the landing area behind the building) – you can time with your watch – probably about 16 seconds. That is all you have.

“That is why it is recommended that you do at least 150 to 200 sky-diving jumps first, and then (do) BASE (jump),” Aziz Ahmad told The Borneo Post when met prior the ‘Miring’ ceremony for the event on Saturday.

However, Aziz Ahmad said there was exception as at times some people doing BASE jump landed on water and not hard surface.

He concurred that not everyone could do BASE jumping as it requires skills and mental conditioning.

On a personal note, Aziz Ahmad said he stopped logging the number of jumps he made after reaching 400.

“Don’t be mistaken, I still do BASE jumping, just that I have stopped logging (recording).”

Asked the rationale for keeping a log, he said the record indicates the number of jumps one makes, which also shows one’s experience and whether one understands what this sport is all about.

Sibu Base Jump 2016 technical advisor Gary Cunningham, meanwhile, estimated the total jumps made by jumpers last year was between 600 and 700 as he did not have the record off-hand.

He expected there would be a lot more jumps made this year, given the bigger number of jumpers.

“I am trying to track down all the jumpers to get the tally of it all and will have it done by the end of the event,” Gary said.

He believed a couple of jumpers recorded more jumps than anyone in the country in the last six to 10 years.

“It will be interesting to see if we can maintain that pace today.”

He said the eighth edition of BASE jump was a record itself as it had the biggest number of jumpers.

“Probably, also a record number of countries (taking part). But it is certainly a record amount of enjoyment,” he chuckled.

Gary, who had been making an annual trip to Sibu since the event first started in 2009, said he loved to visit the longhouse at the end of the event.

He assured that he would do his level best to promote Sibu, in particular the Visit Sibu Year 2017.

“We are hoping to have a lot more jumpers here next year for the Visit Sibu Year,” the Australian enthused.

They comprised 47 men and five women from 15 countries who leapt from Sarawak’s tallest building, the 126-metre tall Wisma Sanyan here.

The jump into its eighth year started on Sept 22 and ended yesterday.

BASE is an acronym that stands for four categories of fixed objects from which a person can jump; namely buildings, antennae, spans (bridge) and earth (cliff).