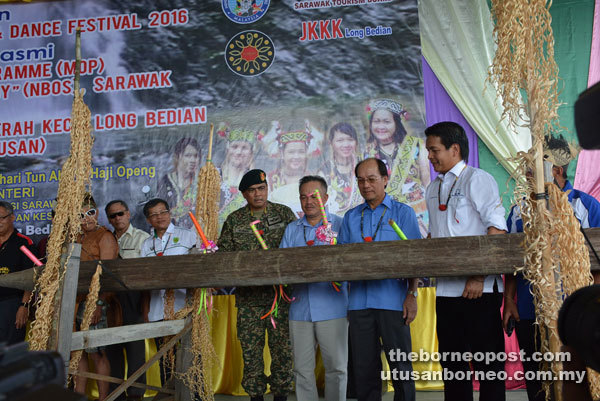 MIRI: The highlanders in Baram can benefit from the tourism industry if they commit to showcase their unique identity and colourful cultures and traditions to attract more tourists to the area.

Baram, the heartland to over 20 main and sub-ethnic Orang Ulus, is rich with not only the flora and fauna, but also in culture.

According to Mulu assemblyman Datuk Gerawat Gala, the people in Baram are also well-known for their hospitality.

“We are naturally hospitable. This is very important in the tourism industry because if we are not hospitable enough, then it would not guarantee tourists coming in or coming back to visit us,” he said at the Third Highland Folk Music and Dance Festival in Long Bedian on Saturday.

He pointed out that the state government was focusing on two sectors to develop Baram, namely tourism and commercial agriculture such as oil palm and rubber plantations.

“These two industries have potential to be developed, but it is really up to the communities in Baram whether or not they are willing to be committed and have the passion to elevate their standard of living,” he said.

On the festival, Gerawat commended the effort of uniting all the 13 Orang Ulu associations under the Federation of Orang Ulu Malaysia (Forum) umbrella.

“In the future, it would not just draw hundreds but thousands of visitors to Telang Usan,” he said.

The festival had provided opportunities for the locals, including the Penans, to earn extra income through the sale of handicrafts, while those in Long Bedian earned more from homestays and food stalls, he said.

The festival was also held to commemorate the first anniversary of Long Bedian being elevated as a sub-district.

At the function, Gerawat announced that Abang Johari had approved RM30,000 from his Minor Rural Project (MRP) grant for the festival.

Gerawat also chipped in RM15,000 from his MRP fund.