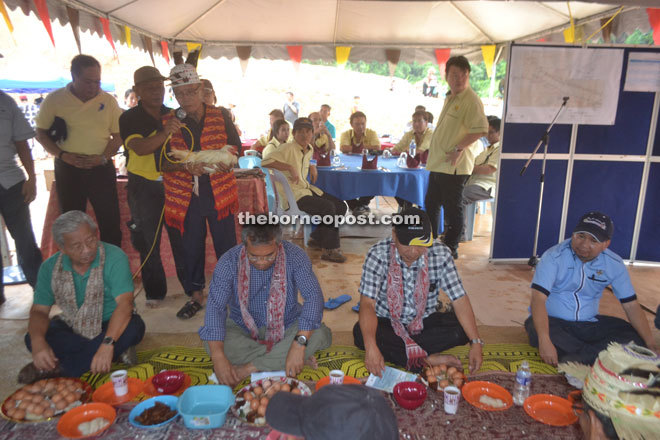 (From left) Masing, Nyabong, Joseph and Elvis performing the ‘miring’ ceremony while an elder performs the ‘bebieu’.

The Baleh assemblyman announced the start of the project at a ceremony to commence Package A phases 2, 3, 4, 5, 6 and 7 of the road construction covering a stretch of some 35 km at a cost of RM700 million at Sungai Stapang, Sepata Baleh about two hours’ speed boat journey from here.

The work commenced in May and is scheduled to be completed by end of 2018. Undertaking the project are Debessa Development Sdn Bhd, Pekerjaan Piasau Kontrik Sdn Bhd, Untang Jaya Sdn Bhd and Semado Sdn Bhd.

“I must say thank you to the government for building this road. Now, after waiting exactly 33 years and after me serving eight terms as the assemblyman for Baleh, the road is to be built. This road can be done because the people of Baleh have voted for it,” he said.

He was glad to declare that the proposed road was approved because the people had agreed to the construction of the proposed Baleh dam though many had initially objected to it.

“The fact is that this road is possible because the proposed Baleh dam is to be built,” explained Masing, who is also the Minister of Infrastructure Development and Transportation.

The stretch from Baleh bridge to Sungai Sebetang is roughly half the total distance of 70km of the Baleh road project worth RM1.4 billion.

On the RM10 billion proposed Baleh dam, he said apart from providing electricity to the state and all longhouses in Baleh it will offer job and business opportunities to the local people.

“I must make sure that SEB (Sarawak Electricity Berhad) supplies electricity to all longhouses in Baleh,” he assured.