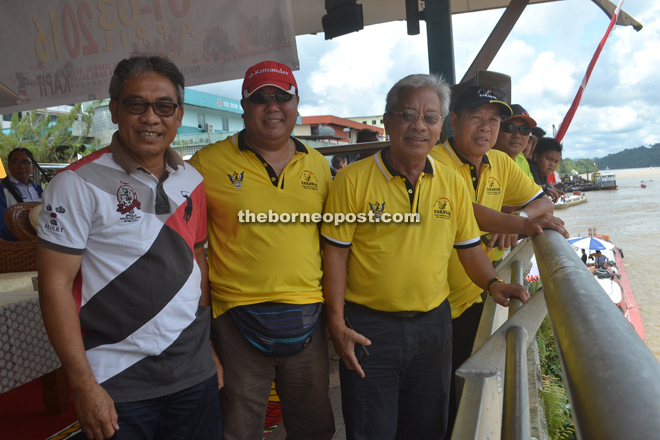 (From left) Nyabong, Jack Janda, Masing and Joseph Belayong pose for a photo at the temporary grandstand.

KAPIT: The Baleh-Kapit Raft Safari 2016, which ended yesterday, featured only 28 rafting teams, but the organisers were not worried.

Minister of Land Development Tan Sri Datuk Amar Dr James Jemut Masing opined the relatively lukewarm response to the 21st edition of this spectacle could be due to the many activities held here recently and preparations for the coming state election.

He said the Ibans were now busy harvesting padi and the Sejiwa Senada event was only held recently.

“Normally, teams from outside, like from Bintulu, Sri Aman, Kanowit, Sibu, Song, Belaga and Kuching would participate, but this time around, they are all busy preparing for the election,” he said in an interview at the Kapit Wharf Terminal.

On a related matter, Masing urged the business community here to sponsor the race in future as events such as this drew a lot of people to Kapit town.

“Kapit town was full of people the last two days. When they come, they drink and eat. Who stands to benefit? It’s the business community in Kapit, of course.” 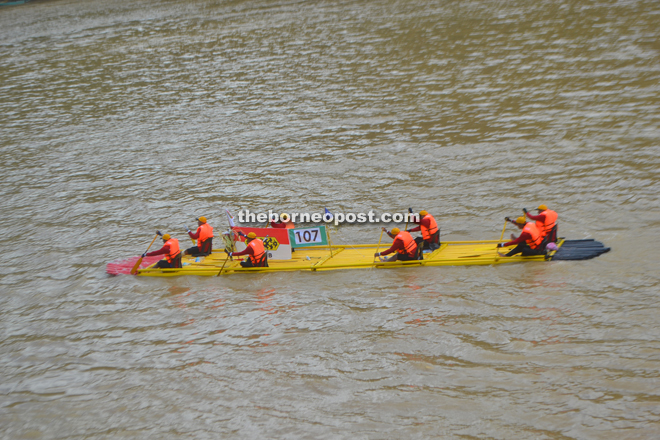 A raft crossing the finishing line in front of Kapit Terminal.

On the races, which also included power boat racing and engine-pump boat racing, he noted there were participants from Brunei, Miri, Sarikei, Kuching, Limbang and Sibu.

He said the engine-pump boat category attracted many young racers, and interest in this form of racing in very small boats had gathered pace due to its low maintenance cost compared to power boats.

“Now even the Ibans here can dismantle and assemble such engines within one hour. They can also modify the engines.”

The three-day Baleh Kapit Raft Safari started on April 1 at two points: along Baleh River and Gaat River, and the racing distances from there till Kapit town was between six and eight hours.

The prizes for the Best Decorated Raft category will be decided by the organising committee later.