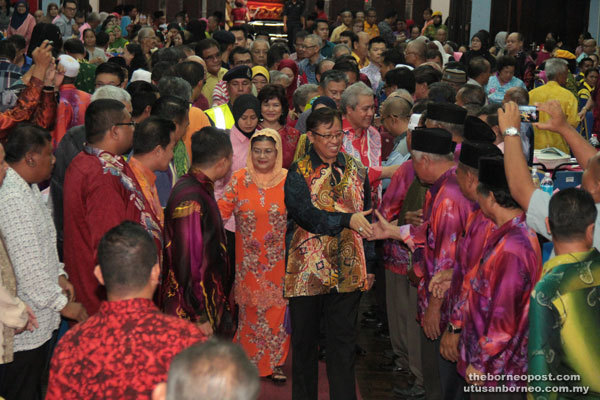 Abang Johari and Juma’ani receive a rousing welcome upon their arrival at the CNY gathering in Limbang.

Speaking at the ‘Meet-the-People’ session and Chinese New Year gathering at Limbang Civic Centre on Monday night, Second Minister of Resource Planning and Environment Datuk Amar Awang Tengah Ali Hasan said he had no doubt that Abang Johari – whom he had known since the 1980s when he (Awang Tengah) was acting district officer of Dalat and later on as an officer under Abang Johari in the Ministry of Agriculture – shared a common vision and mission with his predecessor, Datuk Patinggi Tan Sri Adenan Satem.

Awang Tengah said they grew up together in the same village and had served together in a political platform under the fourth chief minister, the present Head of State Tun Pehin Sri Abdul Taib Mahmud; and also under Adenan, who passed away on Jan 11 this year.

“Three months before Tok Nan passed away, the Head of State was already thinking of the need for a contingency plan if the unexpected happened. I told him: ‘You must appoint Abang Johari. You have the power to appoint’,” he said.

He said Abang Johari had a proven track record in leadership, including his early days as Assistant Minister of Agriculture in the 80s. Now, the chief minister had a wealth of experience in handing state matters and politics, he added.

“I can tell you that when he (Abang Johari) was just an assistant minister, he was practically managing the whole ministry, and he diligently visited every nook and corner of the state.”

Awang Tengah said it was Abang Johari who brought him to work in his ministry and later, was involved in getting him into politics where he was picked as a Barisan Nasional (BN) candidate to stand in Lawas during the Ming Court Affair in 1987.

As a political unknown then, Awang Tengah was once stopped by a security guard from entering the PBB headquarters, when Abang Johari stepped in and said: “Hey, he is the candidate”.

A year after being elected, he was appointed assistant minister. Awang Tengah believed the man behind that appointment was Abang Johari.

Awang Tengah said the people of Limbang and Lawas were touched by the symbolic gesture of Abang Johari returning to his birthplace, Limbang, to kick off his official statewide ‘Meet-the-People’ sessions.

“I have high confidence that he will succeed as the new captain of Team Adenan, continuing his (Adenan’s) legacy and struggles.”

Awang Tengah said Abang Johari had the understanding of the socio-economy, demography, being chief minister of every race and community in Sarawak, and also the aspiration of Sarawakians counting on him to uphold the state rights.

“We must stand united behind Abang Johari and give him our full support,” he said.