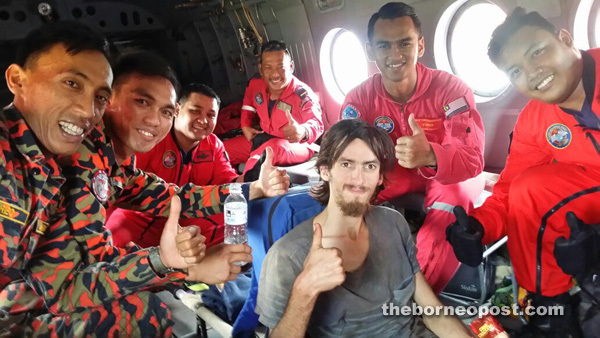 Gaskell is seen with SAR team members on board the SAR helicopter.

MIRI: Australian tourist Andrew James Gaskell, who went missing in Mulu for 10 days, was found in a weakened and thin state barely 5km from Mulu Airport around 12.30pm yesterday.

He was airlifted here for immediate treatment at Miri Hospital and found to be in a stable condition, with his only injuries being blisters on his feet and received outpatient treatment.

Search and Rescue (SAR) Team IV found the 26-year-old engineer at Hidden Valley, located within Camp 4 of Mulu National Park, some 24km from base camp.

A SAR helicopter brought him here and he arrived at Miri Airport at 2.35pm.

Assistant fire superintendent Ahmad Fissol Ismail, who was part of the crew conducting aerial SAR, said he received a signal from the SAR team on the ground indicating Gaskell had been found.

“The ground party had found the victim and made signals to us, who were doing an aerial search in the area. We immediately performed winching work to lift the victim from the ground and brought him to Mulu Airport, where medical officers were waiting,” he told the media.

“We are truly happy and blessed that the victim has been found safe and sound despite being weak.”

A total of 63 members were involved in the SAR operation.

On Oct 26, a missing person’s report was lodged at the Miri Central police station, five days after Gaskell went to Mulu National Park and had failed to return to his friend Timothy Kalang’s house as planned.

A SAR mission was then set up involving five SAR teams comprising the police, firefighters, park management and some locals.