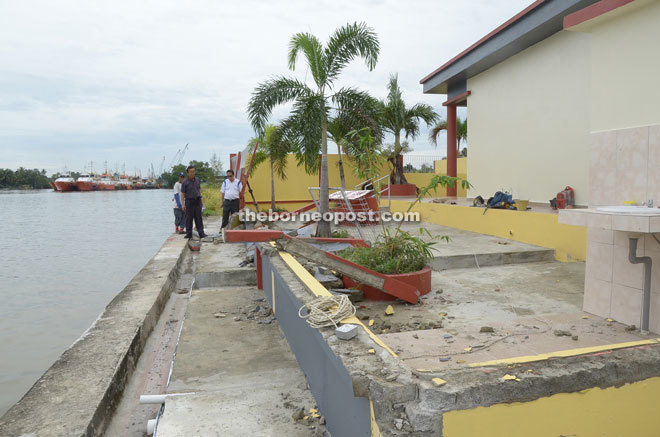 The damaged portion of Miri Chiang Hsia Association’s shrine. It was found in this condition on Friday.

MIRI: Miri Chiang Hsia Association has been both fuming and worried since last Friday.

This follows devastating damage to a section of their shrine, and so far nobody knows how it happened or who did it.

The shrine’s person-in-charge, Bong Kim Chung, appealed to those in the know to report the incident.

He told reporters yesterday that the shrine was renovated only early this year, but a part of it was found damaged on Friday.

“We are very concerned as this shrine means a lot to us. It is our ancestors’ resting place, and if this situation is not handled carefully, it could affect our clans’ feng shui.”

He said the renovation included building a retaining wall and a ‘gate’ facing the river for feng shui purposes.

As the shrine lies along Miri River, one possibility is that the damage was due to a passing boat or ship.

Bong urged small boat operators and shipping companies who frequent the river to be extra careful when passing the area as they might also damage the cemetery near the riverbank.