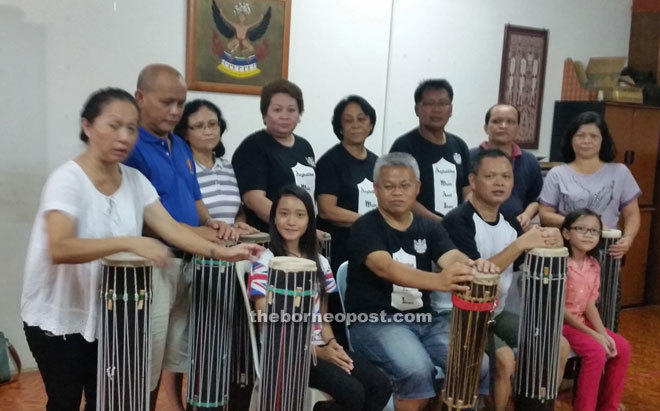 Mabong (seated, second right) with fellow artist Nuga on his left, and the ‘gendang’ learners.

MIRI: The Sarawak Dayak Association Academy (Asadia) has resumed its ‘Gendang Pampat’ class–the second in a series following the success of its inaugural class.

Asadia spokesperson Mabong Unggang said the two-hour class was being held at Asadia’s headquarters in Kota Sentosa, here every Sunday, commencing at 2pm.

According to him, so far there are 13 ‘gendang’ (drum) enthusiasts taking part, with the youngest being an Iban girl Avygel Tiong Langie, aged 11.

The first class was held in February this year at Muara Tuang Army Camp in Kota Samarahan, with 40 music enthusiasts

from the 10th Royal Ranger Regiment.

“The Gendang Pampat is an Iban traditional music and one of our objectives is to expose and revive this traditional art and performance as part and parcel of the Dayak culture,” he told The Borneo Post during a visit to the city here yesterday.

Unggang hoped that more Dayaks, Ibans in particular, would support by joining the class, in order to acquire the knowledge and preserve the traditional art.

He said since its inception in March 2014, Asadia had run other classes of the Iban and Orang Ulu dance called ‘Ngajat’ and ‘Kuntau’ (Iban traditional art of self defence), ‘Betaboh’ as well making Iban traditional costumes and accessories.