The European debt crisis brought mighty economies like France, Italy, Spain and the U.K. down to their knees. If that is not embarrassing enough, the foreign reserves of these nations have fallen below some of their former colonies. For instance, Hong Kong, India, Singapore and Malaysia each have stacked up a bigger reserves than Britain. The Algerian foreign reserves is now higher than France. Brazilian reserves is 16 times that of Portugal, while Mexican 3 times Spain’s. Even Indonesia has a reserves double that of former colonial power Netherlands. Italy is currently spared from such humiliation. The European crisis in its fifth year

Germany remains strong, but is showing signs of fatigue, thanks to its crisis-laden neighbors who not only dragged the continent’s growth but also kept asking for bailouts. The German economy shrank 0.5 percent in the final three months of 2012, its worst quarterly performance in three years, signaling that the ‘muscle man of Europe’ may not be that resilient to the seas of recession surround it.

In midst of the chaos, one tiny nation emerged as the new financial juggernaut in Europe. Its foreign reserves is now the biggest in the continent, nearly twice that of Germany’s. It has budget surplus unlike most of its neighbors who are deep into deficit. Its debt-to-GDP ratio is down to an amazingly low 35 percent, compared to Germany’s 82.8 percent or the eurozone average of 90 percent. Such debt level is better than even emerging Asian economies like Malaysia (53.7 percent), Thailand (44 percent) or Taiwan (40.8 percent).

By comparison, Greece has a debt-to-GDP ratio of 175.6 percent while the United States 100 percent. 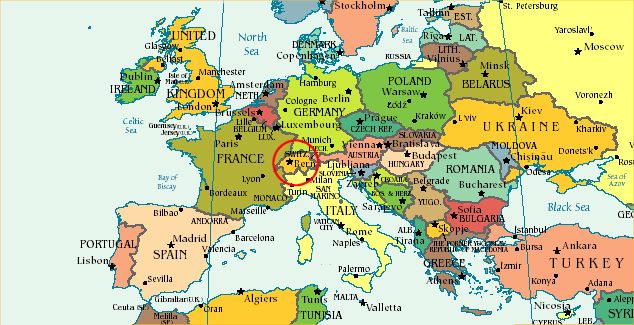 The worlds business leaders have just concluded their annual gathering at the World Economic Forum in Davos, Switzerland. It is a meeting that brings together some 2,500 top business leaders, international political leaders, selected intellectuals and journalists to discuss the most pressing issues facing the world. These people have significant influence on global developments, and they will chart the future of the economy and the financial markets.

But the real power lies elsewhere, and not very far away either, tucked away in an unassuming building on Berns Bundesplatz: Swiss National Bank (SNB), the central bank of Switzerland. Few have noticed that over the past several months the bank has grown to be one of the worlds biggest financial players. If it wanted to, the bank could topple Europes government bond market overnight or decide which way interest rates in Germany go. The SNB is even a majority shareholder in various multinational companies.

“Switzerland has become one of the worlds largest hedge funds,” says Christian Heger, head investment strategist at HSBC Global Asset Management in Germany. The SNB has been making major direct investment in the private sector and the bond market. It has grown to become a frightening level of financial sway across Europe and the world. The Swiss government can freely move 350 billion euros around at will, and are making fat profits through it. That amount of money is equivalent to the entire GDP of Taiwan. 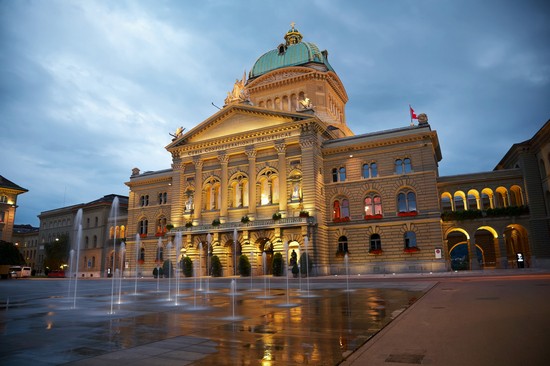 The Swiss National Bank - vast power inside this building

So how did Switzerland become that rich in cash?

It all stemmed from the European and American financial crisis. A weak euro and U.S. dollar drove investors en masses to the Swiss Franc, traditionally seen as a safe haven in time of instability. Prior to the crisis, one franc fetched around 0.82 dollar, but this changed soon; the franc becomes more expensive than the dollar, with one franc exchanging for 1.30 dollar in mid-2011. This hit Swiss companies hard on the head, making them uncompetitive abroad. A high Swiss Franc not only hamper exports, it also deter tourists to Switzerland.

Switzerland, well-known for its organizational efficiency, carefully drafted up an economic policy. In Sept 2011, the Swiss decided to stop the out-of-control appreciation of the Swiss franc. The SNB set the rate of 1.20 Swiss francs for 1 euro, and announced it would start defending that threshold right away to make sure the franc doesn’t move below that rate. That means whenever the franc rises and the exchange rate threatened to go under that threshold, the SNB will print more money and sell it on the currency market.

Conventional wisdom has it that when a country prints money out from thin air, the currency value plummets. But the Swiss Franc is a completely different scenario. Demands from overseas investors are so strong that the value not only sustain but keep breaching the threshold, forcing the Swiss government to print more money just to push down the rate of the franc. The country piled up billions of reserves in the process. Swiss National Bank - sudden explosion of wealth (in billion) since 2011

What the Swiss intended to do with the artificially-created money was not clear, its not something central bankers are keen to talk about. But now the world found out, indirectly, how wise the Swiss are. While the U.S. prints money to pay down debts and to cover its gigantic deficit. Switzerland prints money and convert them into real assets. How? By investing in companies and bond markets across the world.

This was exposed in Finland, where firms have to publish the names of their largest investors on a regular basis. And so it became known that the SNB is already Nokia’s fifth largest shareholder. Nokia is one of Finland’s top companies, and even though it has fallen behind the likes of Samsung and Apple, shares of Nokia rose 59 percent in the past 3 months. Imagine how much money Switzerland made from there.

SNB is not saying which stocks they hold across Europe and the world, making it hard to trace how much assets it really have. After all, Switzerland has a reputation of being secretive when it comes to banking and finance. One thing is sure however, SNB has at least 100 billion euros in German bonds. The total value of German bonds is 1.2 trillion euros, which means that Germanys southern neighbor holds over 8 percent of its debts. That alone can influence rates, and is an example of the sway Switzerland has over Germany - Europe’s largest economy. 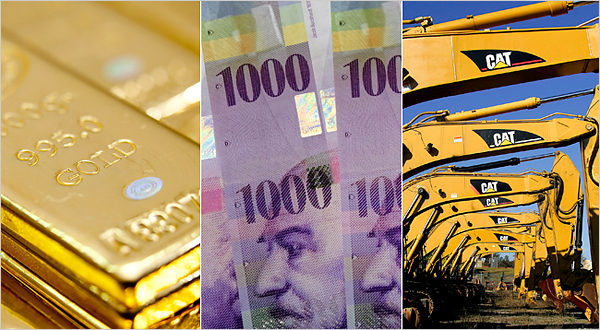 And the rates of German bonds did in fact, changed recently. As the euro crisis loosen up a little, so does the pressure on the Swiss Franc. The exchange rate for the euro has been rising since the beginning of the year, to 1.24 francs for 1 euro. As a result the SNB doesnt have to print money anymore, and doesnt have to invest the artificially-created cash anymore too.

“So a major regular German bonds buyer withdraws from the market,” says Harald Preissler, chief economist at the Bantleon bond management firm. This inevitably led to some market effects, the yields of five-year German bonds have doubled since the beginning of 2013, from 0.3 to 0.6 percent. Though thats still very low, it shows what happens when the Swiss stop buying. One cant even imagine what would happen if they started to sell.

Selling is an attractive option for the Swiss too. Analysts estimated that the rise of global stock markets since the beginning of the year should have increased SNB wealth by around 13.6 billion euros. This is the real profits they made from money created out from nowhere.

The Swiss fiscal efficiency - what Europe can learn from Switzerland

European investors can only hope that Switzerland will keep their holdings for as long as possible. If the Swiss sells their large quantities of euro-based government bonds, other bonds and shares to walk off with the massive profits. The German bonds could drastically be affected, which in turn, impact the entire Europe. Stock values would also fall significantly if such sales took place Europe-wide, since the SNB has apparently been buying all across the continent.

This remind economists of another tiny nation in Southeast Asia whom, like Switzerland, dearth in natural resources but enjoyed financial dominance in its region. Singapore, sitting on the biggest foreign reserves in ASEAN, is a major investor across Southeast Asia, and is also a surplus nation among its deficit neighbors. From Malaysia to Indonesia, Myanmar to Vietnam, there is no place left untouched by Singaporean investments. In the process, its two sovereign funds, Temasek Holdings and Government of Singapore Investment Corp. (GIC), accumulated a total assets worth $472 billion, a figure very near to what SNB has now.

Those who said the US is heading for self-destruction by printing money over and over, Switzerland’s case is the best refute. The ‘American downfall’, ‘America is finished’ stuff, they are overblown, the latest round of money printing (QE3) no longer result in any devaluation of the USD like the last two. Pretty simple, people who know how to game the market, thrive. Anything else won’t matter much.

Some countries’ financial institutions may be simple and inept, but those inside the US Federal Reserves aren’t stupid.