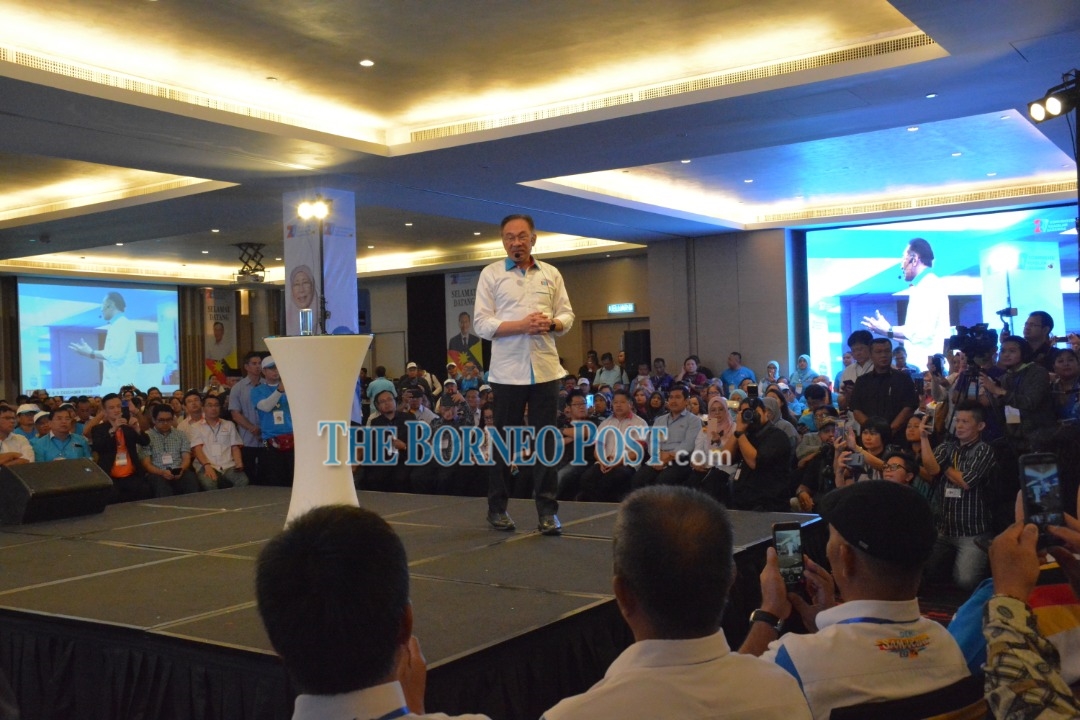 Anwar delivers his speech at the Sarawak PKR Convention at Pullman Hotel this morning.

MIRI: PKR president Datuk Seri Anwar Ibrahim today urged PKR Sarawak leaders at all levels, including members of the state leadership council (MPN), to work together to ensure Pakatan Harapan’s win in the state election due in 2021.

Addressing the Sarawak PKR convention here, Anwar said it was crucial for all branches in the state to focus on strengthening PKR in Sarawak to face the state election, adding that decisions must be made collectively.

“I don’t care about the views of one or two people who don’t agree with me but I will not compromise on all branches, sub-branches, all members working together to ensure Keadilan and Pakatan Harapan wins in Sarawak,” he said.

“I want my message to be sent to our friends that my interest is to make sure that PKR remains strong and champion the rights of Sarawakians.”

Anwar also told the delegates not to worry about their differences with the state MPN, insisting that he will not answer to any criticism nor personal opinions of anyone as his main message was to ensure PKR and PH win in Sarawak.

“Baru Bian is the MPN chairman but he must call meetings with all branches, listen to all of them to determine their priority in the polls.

“Who do they want as candidates? Bring it up to the state level, the central leadership…we have to ensure we pick the best candidates to represent all races,” he said, adding that PKR members must not allow the practise of money politics of the previous Barisan Nasional administration to continue.

Pointing out that he has convened a central leadership committee meeting tomorrow, he said it would be attended by all branch heads and took to task leaders who did not attend such meetings.

“You want to serve a democratic party you must convene meetings and listen to the aspirations of every single member and decide collectively. That is my decision as president as long as I am president, I will never compromise on this principle.”

The convention, which was attended by some 1,200 delegates from 30 PKR Sarawak branches, had been called off by the majority of the state MPN’s members, who are led by Baru.

The MPN had scrapped the event in protest of the party’s move to stop deputy president Datuk Seri Azmin Ali from opening the PKR youth congress in Melaka next month.

However, the party’s top leadership had overruled the MPN decision and instructed that the convention proceed as scheduled.

PKR Sarawak is currently split into two camps with 19 out of 30 branch leaders said to be backing Baru, and the other 11 reportedly wanting him replaced as the state chief.