Next country to be hit by Arab Spring? Sudan’s economy on verge of collapse as protests escalate

- Sharia economics failed to turn country around after 2 years

Many said it wouldn’t happen, that the Arab spring would not reach the country; that Sudan was a country on the periphery of the Arab world and hence unlikely to witness any serious political transformation. But it is finally coming, Sudan, just like its northern neighbor Egypt, has succumbed to economic failures. In recent weeks, thousands of protesters have taken to the streets in cities across the Arab republic of Sudan, including the country’s capital Khartoum, for what is the most widespread public demonstrations since president Omar al-Bashir seized power in a bloodless military coup 24 years ago. 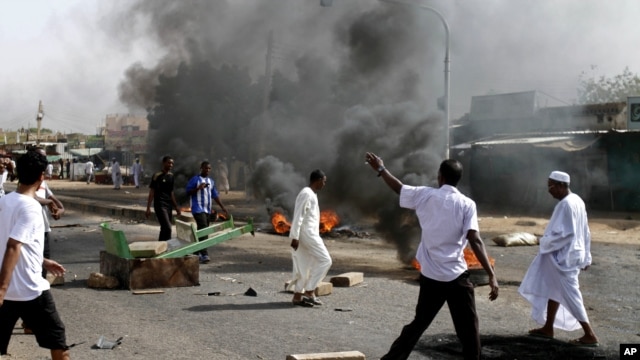 The protests quickly escalated from demonstrations over a cut in fuel subsidies to wider dissent against the country’s leadership after security forces killed at least 50 people last week, according to the African Center for Justice and Peace Studies and human rights watchdog Amnesty International. Local sources put the death toll much higher, although Interior Minister Ibrahim Mahmoud Hamad said only 34 people had died.

It all dated back to the independence of South Sudan in 2011. Prior to the breakup, the united Sudan was a Black-majority state, whose demographics comprised of 53% Black and 39% Arab. Sudanese Arabs, who control the government, are widely accused of practicing apartheid against the country’s non-Arab and non-Muslim citizens, especially that of the Blacks. The deep-rooted ethnic tension fueled conflicts even before Sudan’s independence from the U.K. in 1956, when rebels from the mainly Black Christian south fought the Muslim Arab north.

The country went through two civil wars, the First Sudanese Civil War lasted for 16 years from 1955 to 1972 and ended with the Addis Ababa Agreement, where the south was granted autonomy and the government promised not to impose Sharia on the country. But in 1983, President Gaafar Nimeiry broke the promise, declared all Sudan an Islamic state under Sharia law, including the non-Islamic southern region. This triggered the Second Sudanese Civil War.

http://www.csmonitor.com/var/archive/storage/images/media/images/0712-omar-al-bashir-war-crimes/8299699-1-eng-US/0712-Omar-al-Bashir-war-crimes_full_600.jpg
Protestors calling for President Omar al-Bashir to step down

The Second Civil War lasted for 22 years from 1983 to 2005 and ended with the Naivasha Agreement, where the south was promised an independence referendum in 2011 to determine if South Sudan would break away from Sudan. Fearing a breakup, the Arab government devised a plan to ‘reduce’ Black population in Sudan, paving way for an Arab demographic majority. The final solution is a genocide and displacement of the Black people, in an attempt to intimidate them towards rejecting the referendum.

The violence, specifically the Darfur Genocide, caught international attention. Approximately 500,000 were killed and 3 million displaced in Darfur according to the U.N., making it one of the deadliest conflicts in the 21st century. The OIC and Arab League has remained silent, though in 2010, the International Criminal Court (ICC) charged Sudan’s president Omar al-Bashir for crimes against humanity. He became the first incumbent head of state to be indicted.

Few months before the referendum, the Arab government bombed towns across South Sudan, in another attempt to scare the Blacks into rejecting independence. The efforts were counter-effective however, on 7 February 2011, 98.83% voted in favour of independence and South Sudan became the world’s newest country. The independence of South Sudan also took away 75% of Sudanese oil reserves, leaving the Arab-governed Sudan in financial crisis. China has helped to prop up Sudan’s economy in the past 2 years through various loan schemes in exchange for the country’s oil and mineral concessions, the last being a US$1.5 billion loan via state-owned China National Petroleum Corp in January this year. But Sudan is fast running out of collateral to be used for securing the Chinese loan. Since the southern independence, Sudan has been trying to facilitate an economy based on the Sharia, but it didn’t work and the country’s economic position grew worse.

With cash dwindling fast and economy facing a collapse, President Omar al-Bashir cut petrol subsidies on September 23, driving up pump prices by more than 60% and prompted protests in the capital Khartoum and its surrounding areas. “The latest economic measures aim at preventing the collapse of the economy following the increase in inflation and instability in the exchange rate,” the official SUNA news agency quoted the president as saying. Bashir also warned of “conspiracies being planted by the saboteurs against our country”.

Under the subsidy rates, although oil is purchased at the global rate of US$110 per barrel, it sells for US$49, resulting in a loss of US$61 per barrel for the government. The decision (to scrap the subsidies) came after a series of measures failed to stabilize the Sudanese economy, which has been plagued by inflation and a weakening currency. Bashir blamed the economic sufferings on the “negative impact” from the separation of the South and the loss of oil revenue, according to AFP. Sudan runs out of collateral to secure more Chinese loans

The Sudanese government is bankrupt in more ways than one. The coffers are empty, its upper ranks are ageing and atrophied, corruption is rife. There is a palpable feeling among locals that the ruling junta has run out of ground, teetering on the precipice and threatening to take the country down with it. As protests escalated, the government launched a crackdown on local and international media. Newspapers and media outlets have been suspended or censored and known members of political opposition parties, other activists and journalists have been detained.

Yusif Mohammed, 50, a teacher whose brother was killed in Khartoum’s government clamp down, said “we are very angry about what happened because those protesters, their only weapons were stones and their shouts”. Osama Mohammed, 47, who works in a private company, told the AFP news agency: “After the deaths of those youths we will not keep silent.” The latest unrest is the worst urban unrest ever seen during Bashir’s 24-year rule.

With a Human Development Index of 0.408, the Arab-majority state is among the least developed in the world. At present, more than two million people live under poverty in the country. “This is our Arab Spring, this is the African Spring,” Ahmad, an activist with the main demonstration movement Girifina, told NBC News. He did not give his last name for fear of reprisals. “We’re tired of this corrupt government,” he added. “They started shooting at people, aiming at them. We will not put up with this anymore.” Another revolution brewing in Sudan: country on the brink

In the year since it lost more than 70% of its oil reserves to the South Sudan split, Sudan has faced soaring inflation. “The price of petrol has risen enormously and that of course has ramifications,” said Amin Mekki Medani, a spokesperson for the Confederation of Civil Society, a non-governmental organization in Sudan. “Bread is transported, milk is transported, vegetables are transported and so it has an effect on every aspect of simple life. The price of a loaf of bread remains the same, but the size and the weight of the bread has reduced by about 30%, so it’s not the same. People can see what is happening,” Medani said.

“[The protests] could be seen as an extension to the Arab Spring,” said Islam Al Tayeb, a Middle Eastern research analyst at the International Institute for Strategic Studies. But she added that the Sudanese government had also learned from the experiences of their neighbors. “You can see that from the type and speed of the measures they have taken,” Tayeb said. Sudan’s largest daily newspaper, Al-Intibah, said on its official website that authorities had forced it to stop printing indefinitely because it did not tow the government’s line when reporting the protests.

Sudan’s Interior Minister Ibrahim Mahmoud Hamad has denied that police used live ammunition against protesters, saying protestors are terrorists who had attacked more than 40 gas stations, 13 buses and countless private cars and government buildings. “Most pictures on social media are actually from Egypt, not us,” he said. U.S. State Department spokeswoman Jen Psaki condemned what she described as a “brutal crackdown” in Sudan. “Such a heavy-handed approach by Sudanese security forces is disproportionate, deeply concerning and risks escalation of the unrest,” she said. Students at the Ahfad University for Women near the capital, Khartoum, rallied for a second day, calling for the removal of President Omar al-Bashir and his government. “The people want to bring down the regime!” chanted dozens of students inside the university campus. Amnesty International reported that Sudan’s security forces have arrested at least 800 activists, members of opposition parties, journalists, and others amid ongoing anti-government protests.

Waving pictures of protesters who died, thousands of people rained down Khartoum, with women calling for an end to the regime and chanted “freedom, peace and justice”. Residents cheered on the marchers from rooftops while nearby security forces were stationed in pickup trucks carrying mounted machine guns. “The protests will continue and will reach a general strike. This is our aim,” said Ghazi al-Sanhouri, a nephew of a dead protester. “We will keep uncovering the regime’s brutal tactics in suppressing the protests by killings and atrocities. This regime will come to an end… God willing it will be over.”

In a move aimed at pacifying a frustrated public, the government announced that it would distribute one-off payments to families in need, raise the minimum wage and boost public sector salaries. The official Suna news agency reported that the minister of social solidarity, Mashair al-Dawlab, ordered 500,000 families to be given 150 Sudanese pound (US$21) aid packages in early October. It also quoted the deputy finance minister as saying the public sector salary increases would start at the same time. Sudan’s opposition Popular Congress Party (PCP) Hassan al-Turabi called on President Omar al-Bashir Wednesday to step down peacefully before facing the fate of previous dictators in the region. “We know that the revolution is coming if they continue clinging into power,” Turabi told Al Arabiya in a phone interview from Khartoum. “We must not allow the unrest in the country to develop into an armed conflict. If they accept advice, they have to peacefully leave; that is better for them of course than being held accountable like what is happening in revolutions across the region,” he said.

President Omar al-Bashir had signed a letter pleading with international community to cancel Sudan’s $40 billion plus in external debt. Sudan’s external debt is estimated to have grown by 27% since 2008 from $32.6 billion to $41.4 billion in 2011. The IMF forecasted the debt level to reach $43.7 billion in 2012 and $45.6 billion in 2013. The latter represents 83% of Sudan’s 2011 GDP, which was $55.1 billion. Now teetering on edge of bankruptcy, Sudan would had run out of money by now if it wasn’t for an earlier loan from China.

What happens if Sudan can’t afford to pay loan to china?

will China seize the land?

Malaysia Government cut petrol subsidy, Malaysians just complaint and never protest like this. I wonder what happen if this will happen in Malaysia…

Malaysia Government cut petrol subsidy, Malaysians just complaint and never protest like this. I wonder what happen if this will happen in Malaysia…

Haven’t you noticed? All the signs are there in Malaysia. Slumping economy, increasing internal and external debts reaching critical level, subsidies, corruption, unstable exchange rate, inflation, apartheid policies. The only thing holding back street protest by majority of the people is that there is still food on the table. When people are hungry and desperate, they can and will move mountains.