A 21-year old Bangladeshi man who came to the United States to wage jihad was arrested in an elaborate FBI sting on Wednesday after attempting to blow up the US Federal Reserve building in Manhattan, authorities said. Quazi Mohammad Rezwanul Ahsan Nafis is being charged with attempting to use a weapon of mass destruction and attempting to provide material support to al-Qaeda.

U.S. authorities say he traveled to the United States in January to recruit a terror cell in New York and to attack major targets, which included the New York Fed, the New York Stock Exchange and also the assassination of US President Barack Obama. At a news conference, New York Police Commissioner Raymond Kelly said Nafis, who lives in the Queens section of the city, entered the country on a student visa to study in Missouri.

Upon his arrival in the U.S., Nafis began a recruitment drive for terrorist accomplices. One of his potential recruits happen to be a FBI undercover agent who then alerted the authorities. During a July 5 phone call to the agent, Nafis said he came to America to wage “jihad”, claiming that he admired “Sheik Osama bin Laden” and the al-Qaeda magazine ‘Inspire’. He also said he was in contact with another person in the United States and a “brother” in Bangladesh. FBI then sent more ‘potential terrorist recruits’ to approach Nafis.

Nafis also told the agent that all Muslims and Muslim sheikhs in the United States were Talafi, the Arabic word to describe people who are not true Muslims. He called America dar al-harb, which means land of war in Arabic, the report charges. He also fondly referred to Osama Bin Laden as Sheikh O.

The US Fed building in New York, underneath it stored 20% of the world’s gold reserves

In subsequent recorded calls during the next 10 days, Nafis said he “had contacts with al-Qaeda members overseas who could assist the group”. In late July, Nafis met another undercover agent in Central Park and said he “wished to launch a terrorist attack against the United States.” He mentioned attacking “a military base in Baltimore with only one guard standing outside,” but then “proposed to attack more than a single individual.”

On Aug. 5, the FBI says, Nafis proposed the stock exchange as a possible target, and the next day he was seen near the NYSE taking notes. In an Aug. 11 meeting with an undercover agent in a Queens hotel, Nafis discussed a suicide attack on the stock exchange, “either contained in one or more cars, or strapped to his person,” the report says. “We are going to need a lot of TNT or dynamite,” he was recorded saying. He however, later changed target to the New York Federal Reserve, the FBI says in the court filing.

He decided to attack the Federal Reserve bank of New York because it is by far the largest (by assets), most active (by volume) and most influential of the 12 regional Federal Reserve Banks, the report said. The Federal Reserve is the central bank of the United States. It is also home to “the world’s largest accumulation of gold,” according to the bank’s website. Dozens of governments and foreign central banks store a portion of their gold reserves in the high-security vaults deep beneath the building. In recent years, it held 216 million troy ounces of gold, or more than a fifth of all global monetary gold reserves, making it a bigger bullion depository than Fort Knox.

A federal law enforcement official told Fox News that there was no evidence Nafis was directed by Al Qaeda to carry out this attack, though he appears to have thought he was working for the terrorist group. It may have been due to the excessive veneration for Osama bin Laden.

The FBI cites a written statement obtained from Nafis in which he said he wanted to “destroy America”, paving way for Muslim world domination, and determined that the best way to achieve that goal was to target the U.S. economy. At one point, according to the filing, Nafis told undercover agents: “I don’t want something that’s like, small. I just want something big. Something very big… that will shake the whole country, that will make America, not one step ahead, change of policy, and make one step ahead, for the Muslims… that will make us one step closer to run the whole world.”

Earlier this month, Mr. Nafis began gathering material to build an explosive, purchasing batteries and electronics, the report said. The undercover agent then gave him 1,000-pound fake explosive materials. Before trying to carry out the alleged terrorism plot, Quazi Mohammad Rezwanul Ahsan Nafis went to a warehouse to help assemble a 1,000-pound bomb using inert material, according to the criminal filing. He also asked an undercover agent to videotape him saying, “We will not stop until we attain victory or martyrdom,” the filing said.

http://bangladesh.um.dk/en/~/media/Bangladesh/Images/Content%20English/Pictures%20-%20New%20web%20page/About%20Bangladesh%20section/Fra%20gammel%20hjemmeside/People/mennesker%20med%20paraplyer.ashx?h=431&w=575&as=1
Bangladesh is a poor, poverty-stricken nation in South Asia

On Tuesday night, he told the FBI informant that he wanted the bombing to happen, no matter what. Nafis drove the bomb in the van and parked it next to the Federal Reserve on Wednesday, officials said. He then went to the nearby Millenium Hilton Hotel, where he checked into a room and recorded the video taking responsibility for the terrorist attack he was about to commit, a source told The News.

FBI agents arrested him at 8:12 a.m. in the hotel room after he repeatedly attempted to use a cell phone to detonate the bomb which he thought was real, the report charges.

Nafis appeared in federal court in Brooklyn today to face charges of attempting to use a weapon of mass destruction and attempting to provide material support to Al Qaeda. Wearing a brown T-shirt and black jeans, he was ordered held without bail and did not enter a plea. His defense attorney had no comment outside court.

“Attempting to destroy a landmark building and kill or maim untold numbers of innocent bystanders is about as serious as the imagination can conjure,” FBI Acting Assistant Director-in-Charge Galligan said. “The defendant faces appropriately severe consequences.”

“Al Qaeda operatives and those they have inspired have tried time and again to make New York City their killing field,” NYPD Commissioner Raymond Kelly said. “After 11 years without a successful attack, it’s understandable if the public becomes complacent. But that’s a luxury law enforcement can’t afford.”

CBS News correspondent John Miller reported that it is possible authorities may take other people into custody in this case. They are looking for at least five other people who are associates of Nafis. If Nafis is convicted in this case, he could face life in prison. 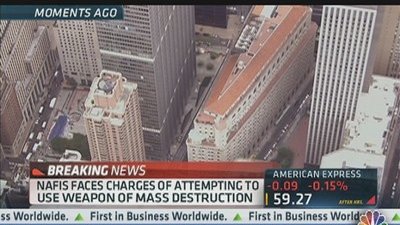 As US economy recovers, terrorists now trying to target US economic assets to halt that recovery

The New York Fed declined to comment. The Fed’s Board of Governors in Washington had no comment Wednesday afternoon, a spokesman said.

Nafis enrolled briefly for the spring semester as a student of Southeastern Missouri State University. Fellow students said that in his short time at the school he became vice president of the Muslim Student Association. School spokeswoman Ann Hayes said Nafis dropped out and later requested that his records be transferred to another institution, which she refused to identify.

Id see him in a group. He used to greet you when he passed by, said Syed Saqib Hussain, an engineering student at the university. He was a normal guy. Mushfiqur Rahman, a sophomore at the school, said he spoke to Nafis several times, but mostly about religion.

This Bangla got pranked… BIG TIME

Please do not insult any religion in this forum. Thank you.

which sentence and who is insulting in this thread?..

which sentence and who is insulting in this thread?..[/quote]

an interesting question… hopefully with a satisfactory answer…

which sentence and who is insulting in this thread?..[/quote]

an interesting question… hopefully with a satisfactory answer…[/quote]
the forumer airnike him/herself. I edited the quote as a report was made. Thread locked to prevent further religious insults/attacks. Thank you.