The official Taliban website has published an article criticising an art project in which 10,000 pink balloons were given away for free in Kabul, saying the event would break Afghanistan and encouraged un-Islamic behavior. The article, written by Qari Habib, called the event another trick to promote Western values among the young Afghan generation. 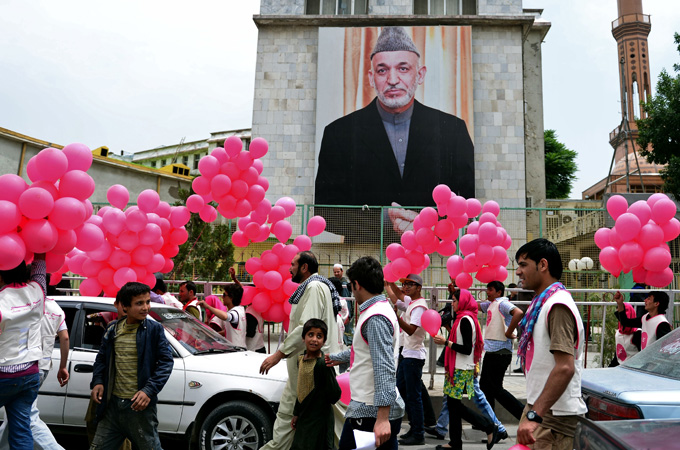 The “We Believe in Balloons” event in Afghanistan

“The West is using different techniques to spread their culture in Afghanistan, sometimes they do it in an undercover way. Some girls were without headscarves, with tight jeans and tops on, and even with mini-skirts on the streets. The boys were also dressed in Western-style outfits. After distributing some balloons, they wandered around Kabul aiming to break the culture of hijab.”

More than 100 young Afghan artists - filmmakers, painters, musicians, photographers and crafters of traditional arts - participated in the event known as “We Believe In Balloons” on Saturday, a project organized Yazmany Arboleda, a 31-year-old conceptual artist from the United States of Latino descent, in an unusual attempt to bring a dose of creativity and fun to the Afghan capital which has been wrecked by decades of war.

It was sponsored by individuals and other non-governmental groups around the world. They paid $1 for each balloon, which contains a written message of peace from volunteers across the globe, the organizer of the project said. The timing of the event had been kept secret to protect the safety of participants. Taliban: Can’t you people see that balloon will destroy our nation?

Prior to the event, Taliban militants had launched a major suicide and gun attack on a compound of the International Organization for Migration (IOM) in central Kabul. One police officer was killed and five gunmen were shot dead in several hours of violence as security forces hunted down the attackers, with bursts of gunfire and grenade blasts heard across the city late into the evening.

“I did think of calling it off last minute but all the volunteers insisted it continued,” Arboleda, the project organizer, said. “I could hear explosions from my house but everyone was just ignoring them and doing the last-minute preparations unaffected. They said that this is what happens in their city, and they have to get on with their lives. How people have embraced this shows how much creativity, positivity and love there is here despite everything.”

The more than 100 young volunteers distributed 10,000 bright pink balloons to workers, shoppers and families living in the dusty capital. “I tell people that this balloon is to bring a smile to your face,” said Nargis Azaryoon, one of the volunteers. “I want to see my people happy.” During the event, a Taliban suicide bomber accidentally killed himself elsewhere in the city while he was preparing his explosives. “The West wanted to smuggle in its culture through this programme,” Taliban writer Habib wrote on the Voice of Jihad website. “It was obvious that the main goal was to break our culture. They declare war on our religious values, modesty and hijab under different names such as women skiing, wrestling, fashion shows and balloons.”

By 2001, the per capita income of the 25 million Central Asian state was under $200, and the country was close to total economic collapse. Even today, Afghanistan remains the poorest and least developed country in Asia. During its time in power, the Taliban regime gained diplomatic recognition from only three states: the United Arab Emirates, Pakistan, and Saudi Arabia, all of which provided substantial aid.

The little-known group gained global notoriety in March 2001 by blowing up two millennium-old giant Buddha statues in Bamiyan, an incident that outraged the Eastern world. Taiwan suspended all its aid to Afghanistan, Hong Kong refused banking accounts to Afghans, protests broke out in Sri Lanka and the country proceed to carve out a sculpture of the Buddha closely resemble to its Bamiyan counterparts, while the Thais and Koreans openly aided the U.S. invasion of Afghanistan 6 months later, a popular decision among their citizens.

With their mission of eliminating Osama bin Laden fulfilled in May 2011, the U.S. and NATO will be withdrawing their troops in 2014 and are supporting a talk between Afghan President Karzai and the Taliban to try to find a peaceful end to the 12-year war. The Taliban have met representatives of about 30 countries, and held backdoor talks with Afghanistan’s opposition politicians. This raised fear of a possible Taliban return of power to Afghanistan after 2014.

Nice balloon color. Pink is believed to be representing compassion, nurturing and love.

Extremists should exist in a planet of their own, not Earth.