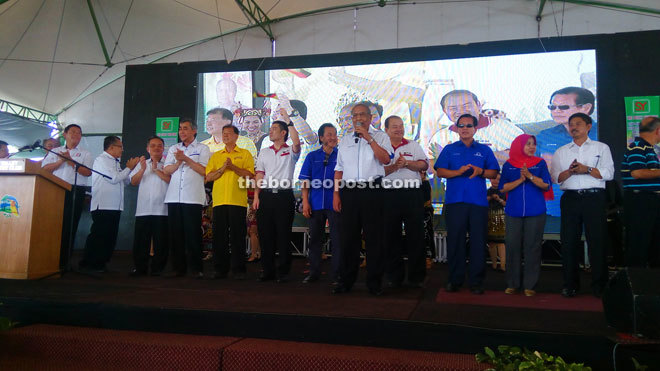 Adenan presenting one of his three sponsored songs, accompanied by other guests on the stage.

MIRI: Datuk Patinggi Tan Sri Adenan Satem said he will resign as chief minister and state BN chairman if Umno sets up its branches in Sarawak.

He made this statement to show that he is serious in not allowing Umno, the backbone and the biggest component party of Barisan Nasional, to enter Sarawak.

“We do not want Umno to come to Sarawak, I already told Umno president (Prime Minister Datuk Seri Najib Tun Razak), and Umno will not come to Sarawak.

“They can come and help with election, but they will not set up branches in Sarawak because Barisan Nasional is already very strong in Sarawak.

“As long as I am the Chief Minister, they will not come here. If they do come here and set up their branches, I will resign,” he said.

According to Adenan, Umno came to Sabah many years ago because Sabah BN was very weak. He pointed out that the situation in Sarawak is different, as BN in Sarawak is strong.

He made the remarks in his address at a special gathering with about 6,000 employees of Shin Yang Group including members of its board of directors at Eastwood Valley Golf and Country Club yesterday.

Adenan sang his favourite English songs ‘The Young Ones’ and ‘Can’t Help Falling In Love With You’ and a Malay oldie.

Later, he announced that the RM1 million would be donated to MRC Miri Kidney Dialysis Centre which was established by Datuk Lee Kim Shin in 1995.

“There is a growing number of people with kidney problems and having dialysis can be costly. Lee started the centre in 1995, and the fund will be used to expand the services of the centre,” he said.