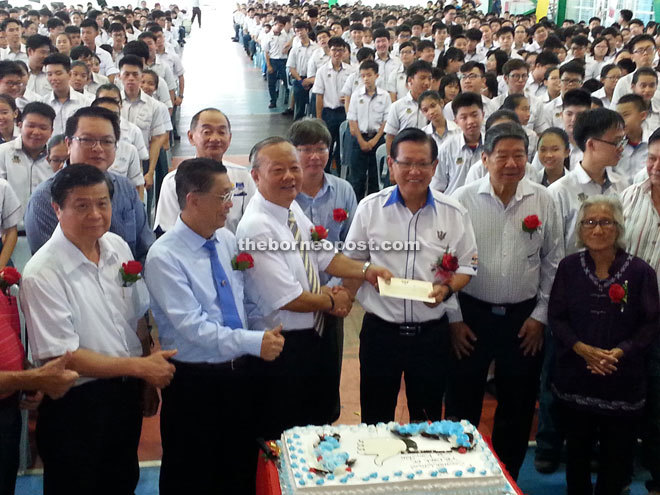 Lee (right) presents the RM2 million-cheque to Law while the students, teachers and staff look on.

Signing and delivering a RM2 million-cheque within hours of his first working day after the election win speaks volume of what lies ahead.

Senadin re-elected assemblyman Datuk Lee Kim Shin said he was asked to pick up the cheque for Riam Road Middle School (RRSS) on Monday afternoon, barely hours after the chief minister checked in for work for the new term.

He delivered the cheque to the school yesterday to the appreciative school board of directors, staff, teachers and the 2,700 students.

Adenan announced the allocation at a fellowship dinner on May 2 in support of the school’s building fund to finance the construction of two new blocks at a cost of RM30 million.

“The chief minister went to work immediately after the election and asked me to pick up the cheque on Monday afternoon. That is a record in Malaysia, barely a week after he made the pledge.

He has certainly earned the trust and confidence of the Chinese community in Sarawak,” said Lee in his speech at the presentation ceremony.

He said the pleasant surprise by the chief minister underscored his sincerity and concern about the Chinese community’s education and welfare,

He hoped the school under its CEO Datuk Dr Fong Onn Min would continue to produce many talents for the country, saying the holistic education approach was the right way to churn out bright students with the right character to thrive in a competitive world.

“The skill to contribute in an organisation is more important than just individual brilliance, as a good captain can lead a team to success which one cannot achieve individually,” he said.

On the hurtful and degrading comments in the social media made by those in Peninsular Malaysia against Sarawakians for returning the Barisan Nasional to power on May 7, Lee slammed it as unwarranted and being spewed by uncultured people.

“They have no rights to make such comments, and it shows that they look down on us and have no respect to the Malaysia Agreement 1963,” he said.

RRSS board executive chairman Dato Sri Law Kiu Kiong in his speech thanked Adenan and the state government for responding to the school and the need of the Chinese community without reservation and unexpected speed in his response.

The school has allocated a piece of land near the school for expansion, and the school board is looking forward to the expansion of its infrastructure and facilities to cater for the demand.

Riam is the first five-star independent Chinese school which has won international recognition for its academic excellence earning entrance to top-notched universities globally, and in sports and co-curricular activities.

He also touched on the importance of resilience and determination by students to succeed in their education and future, saying it was a privilege for him to be able to contribute to education and make a difference to the life of others.

The school also presented a cake to Lee in celebration of his re-election and looked forward to his continued support in the coming term.