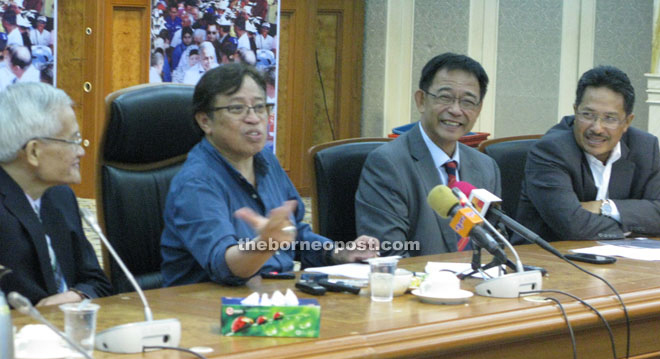 KUCHING: The Batang Lupar Bridge is another project that reflects the strong partnership between federal and state governments to boost development in the state’s coastal areas.

“The bridge, once completed, will be the longest bridge in the country,” he told a press conference when chairing a meeting on ‘Sejiwa Senada 2016-Saratok’ at Wisma Bapa Malaysia yesterday.

“This is also supported by the federal government in building the Pan Borneo Highway, which is already being implemented,” he said.

On the Sejiwa Senada programme, the presence of the Prime Minister Datuk Seri Najib Tun Razak and Adenan at the event in Saratok on Sunday would be a significant one as it would reflect the close cooperation between the federal and state governments.

“We expect at least 80,000 visitors throughout the programme will which take place from today (Feb 26) until Sunday (Feb 28) at the Dataran Saratok,” he said.

The programme is one of the ‘going to the field’ initiatives of both federal and state civil service to get close to the people, besides delivering best services.

The programme will continue to be held at Kapit open stadium in Kapit from March 4 to 6, followed by Dataran Pehin Sri in Mukah from March 18 to 20, Limbang (April 1 to 3), Sri Aman sports complex (April 8 to 10), Samarahan Civic Centre (April 15 to 17) and finally in Matang, Kuching from April 22 to 24.