A trek back to Nature 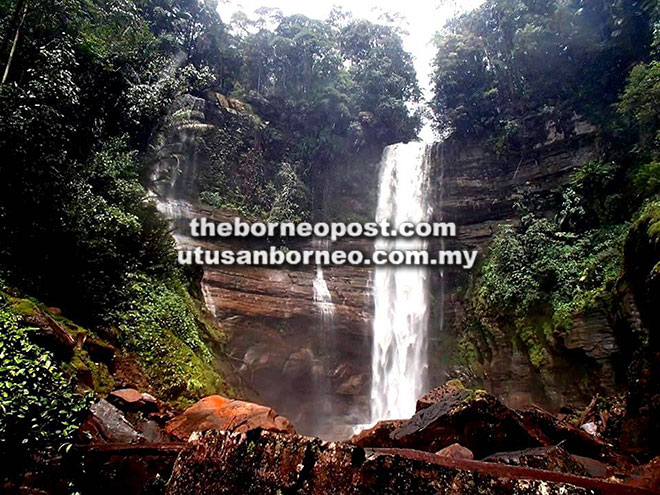 IF you are a nature lover or someone who would do anything to escape from the hectic city life, you might want to consider going to Tekiwit Waterfall in Ulu Baram.

Tekiwit Waterfall, also known as Segah Selaan Waterfall, located some 250km — or a six-hour drive by four-wheel drive (4WD) vehicle — in Ulu Baram, is becoming increasingly popular among not just locals but also visitors from other parts of the country as well as neighbouring Brunei.

Dubbed ‘a hidden gem’, Tekiwit Waterfall offers not just beautiful green scenery but also a variety of nature adventures for those looking to get away from the hustles and bustles of the city. 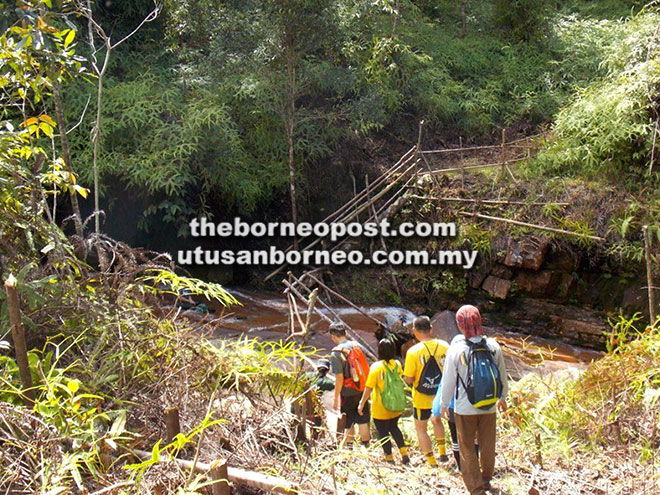 Trekking back from the waterfall.

Even though the area is not as popular as Niah Cave or Mulu Cave, more and more visitors are ready to sit for about six hours in a 4WD through bumby logging roads to get there.

Those not wanting to strain their backs from the rough ride can fly to Long Akah by MASwings.

From there, the journey to a homestay takes about two hours by 4WD.

The visitors, however, need to notify the homestay so that a driver can await their arrival at the airport. 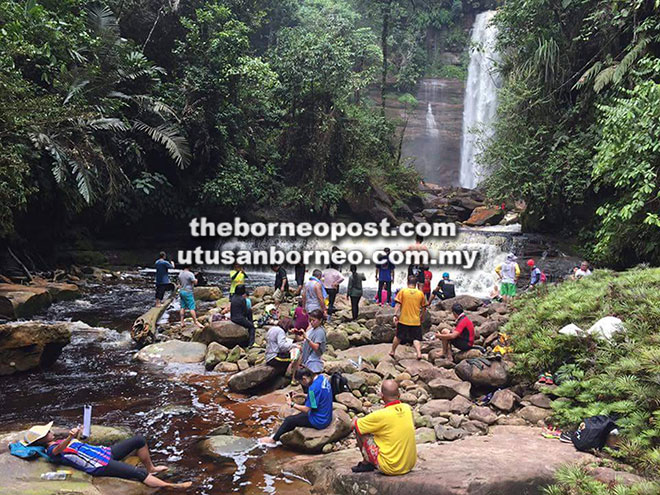 Tourists taking a breather at the Waterfall.

According to Arthur Jalong Lawai whose family own a homestay near the area, they have received over 400 tourists this year alone which, he says, is surprising.

“I bet the location does not affect their love and interest for Mother Nature. The Waterfall, about 100 metres high, is the main attraction although most visitors look forward to the laidback lifestyle — simple, fun, adventurous, at the same time relaxing,” the 30-year-old said.

According to him, the Waterfall has existed for as long as he could remember but was only opened to the public in 2014. 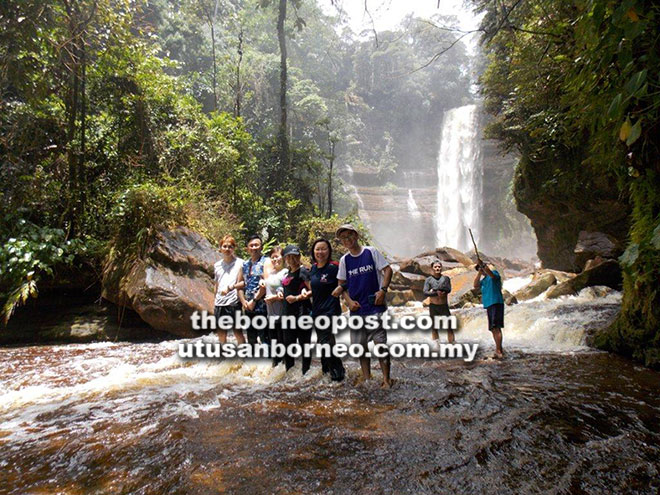 Tourists wading in the fresh cold water of the Tekiwit Waterfall.

Now, his family provides the only homestay and it’s nearest the Waterfall.

“To get there, one can choose either 4WD, taking only 45 minutes, or trekking, which can take one or one and a half hours, depending one’s fitness level,” he added.

However, he pointed out that most tourists preferred trekking as they could enjoy the beautiful scenery and fresh air all the way to the Waterfall.

“Trekkers will pass the Penan’s Kampung Data Bila and pay RM25 per person to the village. They also need to inform the village chief before starting the trek.”

“Apart from trekking and enjoying the Waterfall, visitors may also take part in other activities of the locals, including fishing and looking for jungle produce — which is fun.” 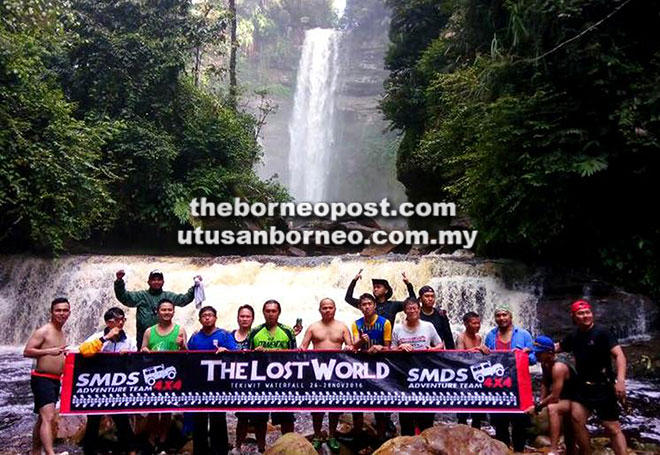 Another group of visitors at Tekiwit Waterfall.

He also said their homestay could cater up to 50 people at one time although they once had a group of 60 people — their biggest group thus far.

The homestay comes with basic facilities, including a ‘halal’ kitchen for those who like to cook their own dish. There is also a mini shop and a mini restaurant within the homestay compound, serving local food.

Arthur hopes that more efforts would be made to promote the Waterfall as one of the tourist attractions in the Baram constituency to enable more people to know about this hidden gem in Ulu Baram. 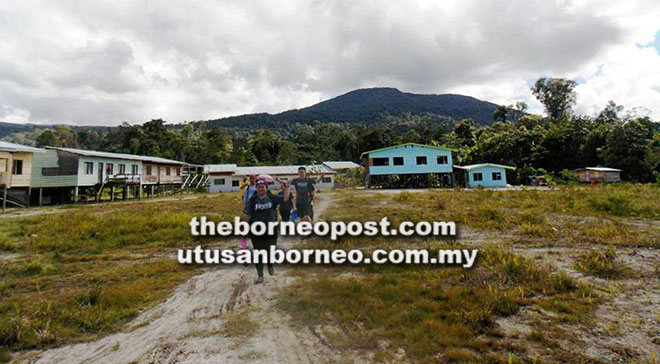 Tourists trekking back to the homestay from Tekiwit Waterfall, passing by the Penan Data Bila village (background). 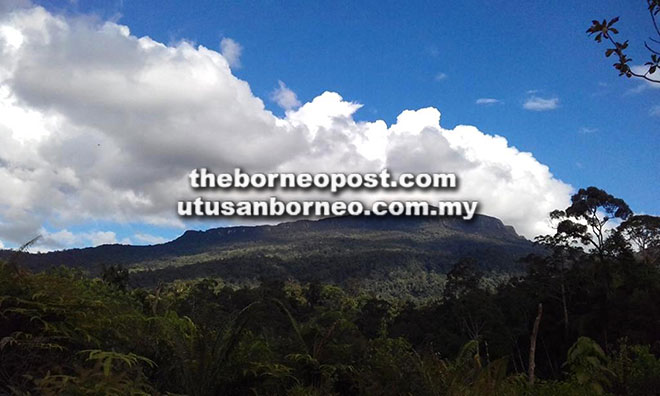 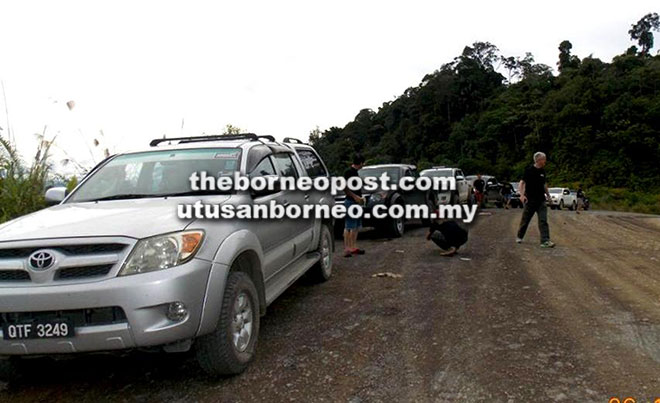 A convoy of 4WD from Miri to Tekiwit Waterfall last year.