98 of 214 longhouses affected by Covid-19 still under lockdown, residents told to bear with ‘temporary inconvenience’ 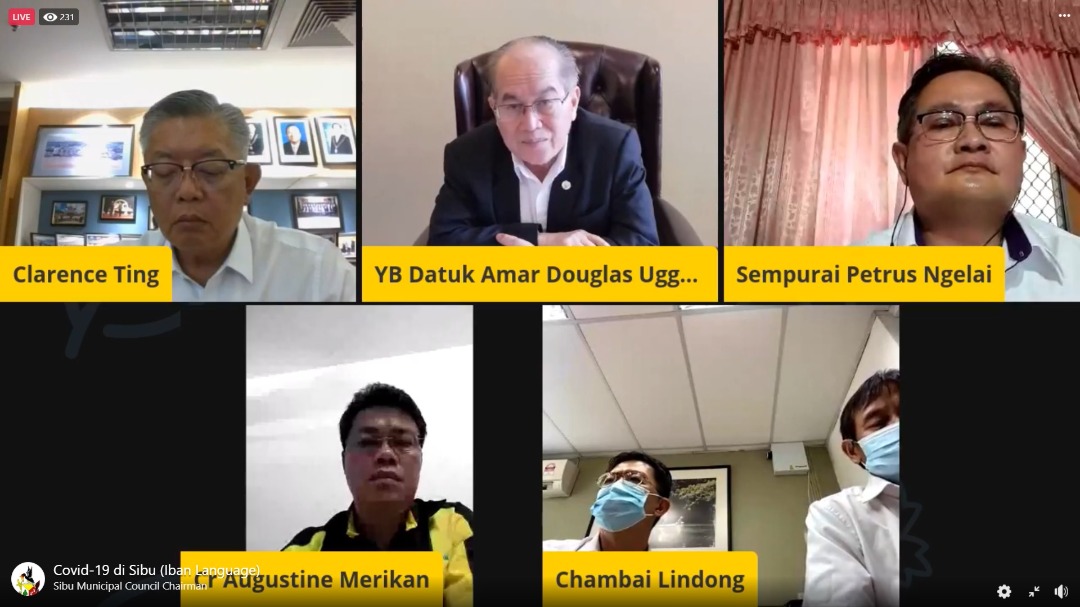 (From top, clockwise) Ting, Uggah, Sempurai, Chambai, Lau and Augustine during the session.

SIBU (Feb 17): As many as 214 longhouses in Sarawak have been affected by lockdowns in a concerted effort by the government to fight the spread of Covid-19.

Sarawak Disaster Management Committee (SDMC) chairman Datuk Amar Douglas Uggah Embas said that from the total, 116 longhouses have been released from lockdown after a second round of swab tests returned negative results for their residents.

The remaining 98 are currently still under lockdown, he said.

“I am very sad to see that during the fourth wave of Covid-19, 214 longhouses have been affected by the pandemic.

“In the third wave, only one longhouse in Lubok Antu was affected but the situation was not that bad, like a fire that soon extinguished itself,” he said during Facebook Live Session hosted by Sibu Municipal Council (SMC) chairman Clarence Ting today.

He said that SDMC’s decision was to impose lockdown if Covid-19 cases were detected at longhouses to enable them to conduct Active Case Detection and swab tests on all the residents.

He also advised affected longhouse residents to be patient and resolute because the government is not out to make life difficult or to create inconvenience to them with the lockdown.

“It is for your own good. Once the virus spreads, it is very difficult to contain.

“I use the analogy of a peat fire because when a peat soil area starts to burn it is very hard to put out the fire and it will continue to burn underground.

“So my advice to longhouse folks is bear the inconveniences of the lockdown because they are only temporary but the benefits are great and for everyone,” he said.

On a similar matter, Uggah told the longhouse residents to follow the standard operating procedures (SOP) when attending funeral ceremonies.

He said that they must remember that a few clusters have emerged after such ceremonies.

In Miri, he said Seruas Cluster emerged after 72 cases were detected from a longhouse after the residents attended a funeral ceremony on Jan 25 to 27.

So is the Gelong Cluster in Kapit which had infected 14 individuals so far after the cluster was announced by SDMC yesterday.

The Pasai Cluster which is the largest active Covid-19 infection cluster in the state also emerged after 38 individuals attended a funeral ceremony at Rumah Langi @ Ambau Douglas in Pasai Siong from Dec 29 to 31 last year.

To date, the Pasai Cluster has infected 2,585 individuals.

The post 98 of 214 longhouses affected by Covid-19 still under lockdown, residents told to bear with ‘temporary inconvenience’ appeared first on Borneo Post Online.