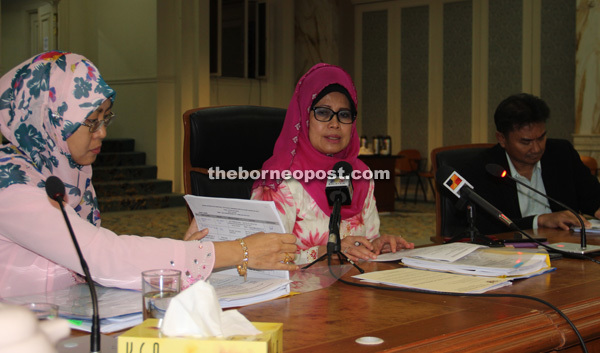 Fatimah (centre) is flanked by Masnah (left) and Zafar at the press conference. (File photo)

KUCHING: The state’s 90/10 target of filling 90 per cent of its teaching posts with Sarawakians by 2018 has been jeopardised by the imminent closing down of three of four teaching colleges in the state.

The three colleges Institut Pendidikan Guru (IPG) Miri, IPG Rejang and IPG Samarahan are among nine teachers training institutes slated to be closed down and converted into polytechnics and vocational colleges announced by Prime Minister Datuk Seri Najib Tun Razak in his budget speech on Oct 21.

Minister for Welfare, Women and Community Wellbeing Datuk Fatimah Abdullah, who holds watching brief for education development in Sarawak, yesterday said she was not consulted on plans to close down or downsize the three institutes leaving the state with only IPG Batu Lintang as a full-fledged teachers training college.

Fatimah said she is still not clear on the fate of the institutes as she was only told about it on the sidelines of the International Conference on Education in Miri recently.

“We were not consulted over the matter. All directors (of IPG in Sarawak) have been called and given briefing in Kuala Lumpur.”

“Our immediate concern is how it is going to affect these directors, lecturers and current trainees and our state’s policy of 90/10 which is to take effect on 2018?” she asked.

Fatimah added that she was informed that there would be no further follow-ups or meetings involving state IPG directors which meant there is no end in sight for the confusion and concerns over the fate of the institutes.

“I think IPG Samarahan will be tasked to develop teachers as it does not take any more trainee teachers,” she opined.

Like Fatimah, he said in order to achieve the ratio of 90:10, Sarawak needs all the existing four teachers training colleges or institutes to produce enough teachers.

“With the latest decision, the federal government is making it hard for us. We don’t even have enough IPGs and yet they are taking them away from us. Without the three teachers training colleges or institutes, we can’t achieve 90:10 policy by 2018.”

He also pointed out that Sarawak, with its vast area, definitely needs more teachers training colleges and institutes to meet the needs.

“Look at how big our state is. One single teachers training college definitely is not going to be enough to meet our needs.

“We still need more teachers and we are now looking for more students to be trained. Instead of closing down or downsizing, the government should be helping us to build more teachers training colleges.

“Now instead of building more, the government is closing down our teachers training colleges which are presently operational. This is just not right. We strongly object to it,” asserted Jisin.

He said the government must stop what it intended to do with the three teachers training institutes in Sarawak and consult with the local educators.