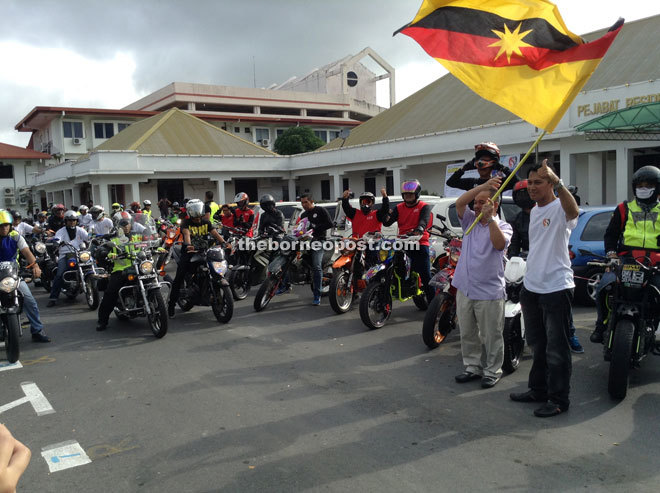 Antonio, with Wahid on his left, flags off the convoy at Miri Resident’s Office.

MIRI: More than 80 bikers from 13 clubs took part in a convoy on Sunday, ahead of the ‘Sejiwa Senada 2016’ programme scheduled here this weekend.

The riders also included those from the Miri Resident’s Office, Miri Information Department as well as members of Miri K-Cars Community.

The flag-off in front of Miri Resident’s Office was performed by Miri Resident Antonio Kahti Galis, who was accompanied by Miri Information officer Wahid Muhamad.

The main objective of the convoy was to promote the ‘Sejiwa Senada’ programme this Jan 9 at MCC field, where

Various activities have been planned between Jan 8 and 10 this year such exhibitions, cultural and recreational activities as well as a health run.

There will also be talks on issues concerning youth and women at Miri Civic Centre, and another to be conducted by local community leaders at Meritz Hotel.

This ‘Resort City’ has been selected as the first leg of the statewide ‘Sejiwa Senada’ programme, themed ‘Government with the People – Moving Sarawak Forward’.

It serves as an outreach programme aimed at increasing the people’s confidence in the government, as well as enhancing the cooperation and relationship between the government and the people further.