80.7% of Indonesians believe country can be next superpower

According to a recent poll conducted by Soegeng Sarjadi Syndicate, who specialize in surveys about Indonesian political moods - an overwhelming majority - some 80.7 percent of the country, believe that Indonesia can become the next global superpower. Such view is reinforced by former president BJ Habibie, who says he hopes that by 2045, 100 years after its independence from the Netherlands, Indonesia will be a world superpower. 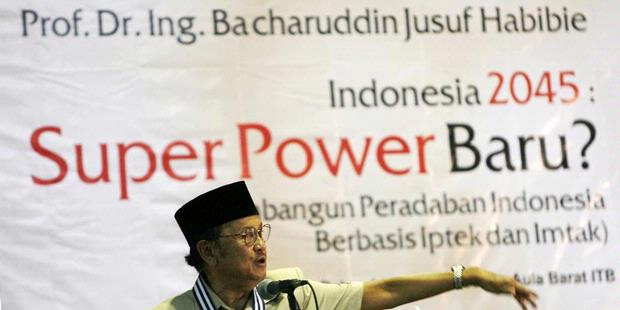 This phenomenon indicates strong optimism among the public. They believe that Indonesia will rise up as a victor in global competitions, survey coordinator Muhammad Dahlan said while presenting the results of the survey in Jakarta. The survey was conducted across the countrys 33 provinces.

Seven percent of respondents said advanced science and technology and a strong military were essential for a nation to grab the superpower title. Other indicators are modern industry and active involvement in global peacekeeping missions, Dahlan said. He added most of the respondents believe that the Indonesian superpower status can be achieved through strong leadership.

Indonesia is the worlds fourth most populous country, after China, India and the United States. The country has literally risen from the ashes of 1997-98 Asian financial crisis to become one of Asias fastest growing economies at the moment. Militarily, Indonesia has the second highest military expenditure in ASEAN after Singapore.

Home to 240 million people, Indonesia was among the few nations in the world who emerged relatively unscathed from the global economic recession 2008-2009, and has since been clocking a GDP growth rate of above 6 percent a year. With the Indian economy slowing down, there were even suggestions that Indonesia should take its place in the BRIC club.

The countrys president, Susilo Bambang Yudhoyono, has unveiled an ambitious blueprint to accelerate economic growth and development, in an attempt to push Indonesia from its current ranking as the 16th largest economy in the world to within the top 10 by 2025. There are also plans to further increase its defense expenditure to match or surpass that of Singapore by 2015.

At the moment, Indonesias military is one of the weakest in the region, spreading out in a large geographical areas (the nation comprises of more than 17,000 islands), and it will take a while plus massive military spending to modernize and upgrade its weaponry into what it calls the minimum essential force. The Indonesian armed forces currently employ 476,000 personnel, the second highest in Southeast Asia after Myanmar (492,000)

The desire among Indonesians for their country to be a world power dated back to its modern and past histories. Indonesia hosted the historic Asia-Africa conference in 1955 that gave inspiration to many nations in both continents to fight for their freedom. A few years later, it joined India and Yugoslavia to found the Non-Aligned Movement to offer nations an alternative to membership in the emerging Eastern and Western power blocs. Indonesian nationalists called for the absorption of Brunei, Malaysia and Singapore to realize the concept of ‘Greater Indonesia’ or ‘Indonesia Raya’

Newly independent and poor at that time, Indonesia was in no way to build a post-World War II international order. Now endowed with a much stronger (and growing) economy, coupled with a much greater confidence, Indonesia is looking to play its part once again in the construction of a new world order, a reflection of growing nationalist sentiment in a country that dreamt about the return to its past Srivijayan and Majapahit glories, an era when the Indonesian archipelago was indeed one of the worlds great powers.

i am a proponent of Great Borneo comprised of Sabah Sarawak,Brunei And Kalimantan.

A great Borneo with a constitution based on the American’s. and we will be a great superpower to strike fear into the hearts of all other Asian countries, China included.

strategically located, we will be the new Singapore of South East Asia.

someday we will obtain the ideal IQs to realize this dream. :lol:

No, if some ministers still holding position and giving lots of stupid comments

We just need some military support.