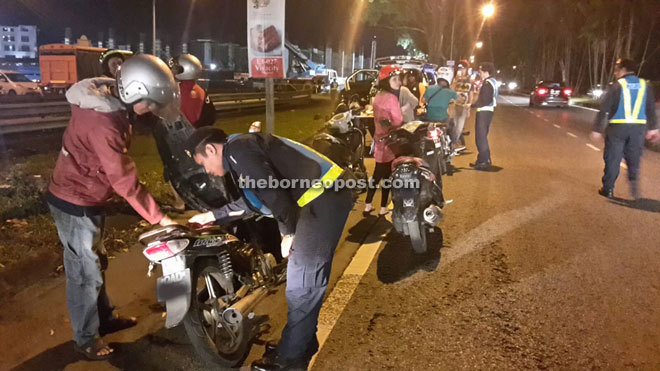 KUCHING: The Road Transport Department (JPJ) flagged down 1,805 motorcyclists across the state during operations on Feb 2, 6, 12 and 14.

Out of this, 536 of them were slapped with notices or summons for various offences.

“The festive season operation was a success. Many road users, especially motorcyclists, were warned and asked to abide by the law.

“The focus was on motorcycles, since many road accidents and fatal cases involved motorcyclists and pillion riders,” he told The Borneo Post yesterday.

On buses, he said 415 express buses were inspected in Kuching, Sibu and Miri during this period, but only two were not up to mark. These two buses in Sibu had cracked mirrors.

Albert added that the state JPJ worked closely with the National Anti-Drug Agency (AADK) to check on bus drivers and co-drivers. He said he was glad none of those checked tested positive for drugs.