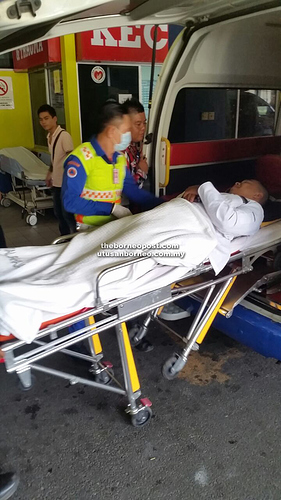 The injured motorcyclist arrives at the hospital following the incident.

KUCHING: A motorcyclist suffered a broken leg after he was struck by a four-wheel drive (4WD) vehicle being pursued by police in Siburan yesterday.

from pursuing traffic police personnel and struck him around 12.30pm.

Following the collision, the 4WD vehicle is said to have come to a sudden halt after which two men emerged and fled the scene on foot.

Police were able to nab one of the suspects soon after but the other disappeared into a nearby jungle.

Road when traffic police conducting an Ops Selamat roadblock signalled for the vehicle to stop.

“The Toyota Land Cruiser, however, sped off and was pursued by traffic police personnel until Mile 16 Kuching-Serian Road where it struck the motorcycle near SMK Siburan.

“One male was arrested while another managed to escape into the bushes,” said Choo, adding that subsequent checks revealed the Land Cruiser had been reported stolen in Miri on July 9.

Meanwhile, the 4WD vehicle was later towed to Padawan District police headquarters for further investigation, while the injured motorcyclist was taken to Sarawak General Hospital for treatment.