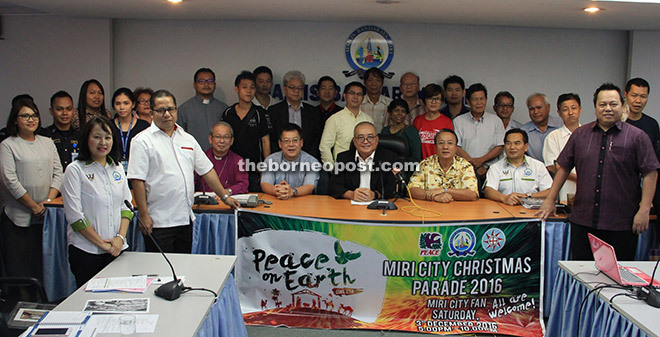 The organising committee members pose for a group photo after the press conference. Yii sits at centre.

Organised by Miri City Council and Borneo Evangelical Mission (BEM), the 9th edition of the annual event carries the theme, ‘Peace on Earth Luke 2:14’. Fifteen churches are taking part in the procession.

“We are anticipating the event as much as the participants, therefore being the biggest major happening in Miri, we are delighted to continue the nearly a decade-old tradition of Miri City,” Mayor Adam Yii told a press conference yesterday.

The parade route will be as follows: Miri City Fan (where the crowd will assemble before the procession) to Jalan Sylvia,

After the launching ceremony, he will also flag-off the parade and thereafter, various stage performances including band and singing performances and choir by various churches will be held.