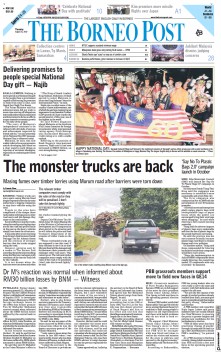 8/30/2017: HOME: 18 left homeless after fire destroys workers’ quarters in Marudi
MIRI: Eighteen people were made homeless when their quarters at Timbarap 3 Estate in Marudi were razed to the ground by fire yesterday. There were no casualties reported as there was nobody at the quarters when fire broke out. In a statement… (read more)

8/30/2017: HOME: Rep highlights pressing needs of his constituents during CM’s visit
MIRI: The Highland Development Agency ( HDA) is the best agency to oversee the development of the state’s highland areas which have huge potential to be developed in terms of infrastructure as well as economically. The HDA was created by Chief… (read more)

8/30/2017: HOME: Study beyond certificate level to become more marketable, ILJTM graduates told
MIRI: Graduates from the various training institutes of the Human Resources Department ( ILJTM) have to advance their studies beyond the certificate level to ensure that Malaysia achieves its target of having a 35 per cent skilled workforce by… (read more)

8/30/2017: HOME: Technical, vocational training in full swing in Sarawak — Lee
MIRI: The state’s emphasis on technical and vocational education and training ( TVET) is in full swing now, with 30 government and private institutions providing programmes aimed at meeting the industrial demand for skilled and semi-skilled… (read more)

8/30/2017: HOME: Getting more women involved in leadership
MIRI: The government is targeting to have at least 30 per cent of women in leadership roles in the country’s public and private sector. Mulu assemblyman Datuk Gerawat Gala stressed this at the opening ceremony of ‘ Personal Appearance Workshop 2017’… (read more)