302 families to relocate after water, power made available 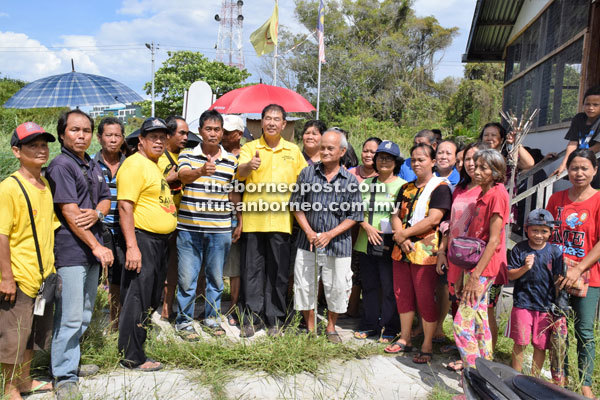 MIRI: The 302 families in Kampung Pasir and Kampung Api-Api in Lutong were asked to move to the Resettlement Scheme in Tudan Desaras, once they get the offer letters from the Land and Survey Department (LSD).

Two hundred and thirty-one of them are from Kampung Api-Api and the rest from Kampung Pasir in Lutong, all of whom have qualified for Phase Two.

During a dialogue at the community hall in Kampung Api-Api yesterday, Piasau assemblyman Datuk Sebastian Ting assured them that he would assist in the relocation process for the 302 families to the new place in Tudan Desaras.

“There are two main issues that should be prioritised and that is water and electricity supply from the Northern Region Water Board (LAKU) and Sarawak Energy Berhad (SEB).

“These two utilities are vital, especially water which should be settled first of all, then electricity,” he pointed out.

Ting further assured them he would strive to bring the

matter up to LAKU and SEB, so that they would expedite the applications, and the families concerned could proceed to build their houses if the utilities were ready.

“This is to avoid hardship and inconvenience as the residents of Kampung Merikan have had to wait for months for the utilities to be ready,” he clarified.

On another note, residents requested for rubbish bins and septic tanks as they have to save their budget for construction of their houses.

On the applications for relocation to Tudan Desaras that were rejected by the Land & Survey Department, Ting said out of the 285 families from Kampung Api-Api, only 231 were approved and given the offer letters.

For those in Kampung Pasir in Lutong, 386 families who applied for similar reason, would be relocated in stages.