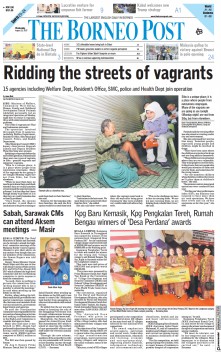 8/23/2017: HOME: Duo from HDC released on bail
KUCHING: An engineer and a senior technician of Housing Development Corporation ( HDC) remanded to facilitate investigation in connection with non- existent painting and renovation works in Miri were released yesterday. Aged 59 and 39 years… (read more)

8/23/2017: HOME: Association backs call for Petros HQ in Miri
MIRI: The Miri Bumiputera Traders Association Sarawak ( PBMS) has backed a call for the headquarters of Sarawak’s wholly-owned oil and gas company Petroleum Sarawak ( Petros) to be set up here. On Monday, academician and councillor Karambir Singh had… (read more)

8/23/2017: HOME: Lorry driver injured after ramming into concrete barriers
MIRI: A lorry driver in his 40s suffered a broken leg and arm after his vehicle rammed into a concrete road barrier at Bukit Song, near Lambir around 5pm on Monday. The victim was travelling here from Bekenu when the lorry went out of control while… (read more)

8/23/2017: HOME: Baby needs help to get respiratory illness treated
MIRI: Family members of 10month-old Claudyea Ericka Yanna are appealing for public assistance with her medical fees. A patient of the Paediatric Unit at Miri Hospital, Claudyea suffers from severe respiratory illness and has been hospitalised for the… (read more)

8/23/2017: HOME: 101 affordable homes being built in Sibuti
MIRI: A total of 101 1Malaysia People-Friendly Housing Programme ( RMR1M) houses are being built in the Sibuti parliamentary constituency. Sibuti Member of Parliament Ahmad Lai Bujang said 483 applications have been received for RMR1M in the… (read more)

8/23/2017: HOME: Zero Strays Miri ensures its dogs free from rabies
MIRI: Zero Strays Miri ( ZSM) is taking no chances by taking precautionary measures to make sure its TNR strays are vaccinated against rabies though there has been no reported case of the disease here. “Since 2013, ZSM has adopted 1,025 dogs under its… (read more)