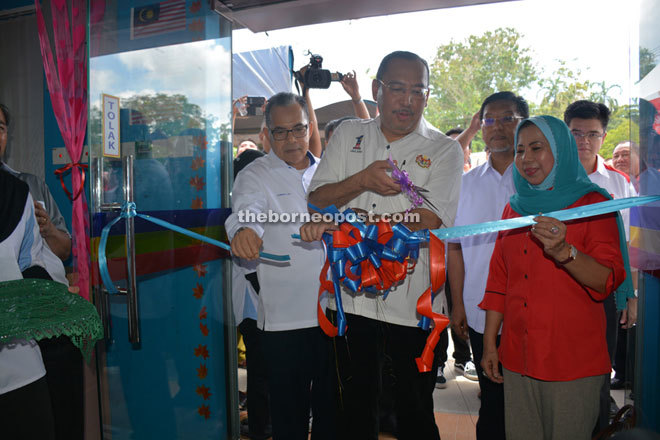 Jailani declares open the centre while Ahmad Lai (left), Rosey (right) and others look on.

MIRI: A total of RM124 millions have been allocated by the government to implement 124 1Malaysia Internet Centres (PI1M) throughout the state.

Deputy Minister of Communication and Multimedia Datuk Jalaini Johari, in revealing this, said this included 10 centres in Miri which included one each in Niah, Suai, Bekenu and Kuala Sibuti.

He said this was one of the government’s efforts to reduce the digital gap between the rural and urban areas – to enable the people to have access to Internet and enjoy the information and communication technology (ICT).

“As such, several initiatives have been taken up through the Communication and Multimedia Malaysia Commission in creating an informative and technology-literate society, be they in the villages or urban centres.”

The villagers in Niah-Suai should be able to benefit from the Internet access to increase their income.

Jailani said this at the opening of ‘Hari Bersama Komuniti PI1M’ in Sepupok, Niah yesterday.

Jailani said the mobile phone coverage in Sarawak had reached 123.5 per cent compared to 43.3 per cent since the programme was implemented in 2008.

At the same function, Jailani announced that from April 1 this year, the government had agreed to provide complimentary services under PI1M for students aged 20 and below or with the University Student Card.

Similar privilege was also given to the senior citizens aged 60 and above and people with disabilities or special needs.