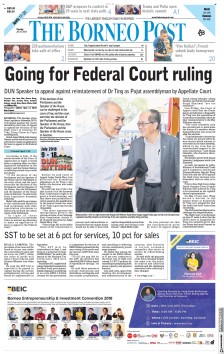 7/17/2018: HOME: Ling hopes two-party system remains a norm in M’sia
MIRI: Malaysia has achieved two-party system, a meaningful democratic achievement for the country, notes Sarawak DAP secretary Alan Ling Sie Kiong. He hopes that this political system will remain to be practised in the country, where a change of… (read more)

7/17/2018: HOME: Farmer reports theft of outboard engine
MIRI: A 62-year- old farmer lodged a police report on Sunday over the theft of his outboard engine at Pujut Corner. The incident was discovered around 10.30pm on Saturday when the victim went to check on his boat and found it missing. The following… (read more)

7/17/2018: HOME: PEN seeks village heads to help register stateless residents
MIRI: Penan Empowerment Network ( PEN) is seeking the cooperation from heads of Penan villages here to come up with a list of their residents who do not have birth certificate and identification card ( IC). Last week, a PEN team headed by its… (read more)