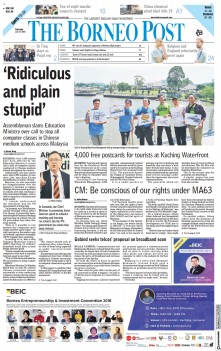 7/14/2018: HOME: Water supply to longhouses cut off, claims Chiew
RESIDENTS of longhouses along Bintulu-Miri Road are deprived of clean water supply due to the construction of Pan Borneo Highway. According to Tanjong Batu assemblyman Chiew Chiu Sing, the longhouse folk are suffering because clean water supply is so… (read more)

7/14/2018: HOME: Man slapped with RM6,500 fine for injuring, threatening wife
MIRI: A man was fined RM6,500 in default nine months in jail after he pleaded guilty to the charge of causing injury and threatening his wife. Magistrate Zuraini Ali Musa announced the sentence yesterday after considering several aspects including the… (read more)

7/14/2018: HOME: Housewife suffers losses of about RM20,000 in house break-in
MIRI: A housewife suffered losses of approximately RM20, 000 after her house in Taman Pantai Luak near Bakam Road here was broken into on Wednesday afternoon. According to a source, the victim had left her house around 3pm with the doors, windows and… (read more)

7/14/2018: HOME: Juvenile charged with possessing uncensored DVDs
MIRI: The Juvenile Court here set Aug 8 for the hearing of a teenage girl’s probationary report after she pleaded guilty to a charge with being in possession of 155 DVDs of film which were not approved by the Film Censorship Board ( LPF). The 17-year-… (read more)

7/14/2018: HOME: Unpaid sub-contractors stop supplying fuel to rural schools
MIRI: Sub- contractors under the Ministry of Education’s school fuel supply programme in Sarawak have halted their supply as they have not been paid by the beleaguered Bintulu-based main contractor Jepak Holdings Sdn Bhd since March. The… (read more)

7/14/2018: HOME: ‘OOOHA’ e-platform in Mandarin to begin operating July 22
MIRI: The much anticipated shopping and business platform, ‘ OOOHA’ e- platform will be officially in use beginning July 22, in conjunction with Sarawak Independence Day. The platform’s co-founder Erick Chin said the first version of the e- platform… (read more)