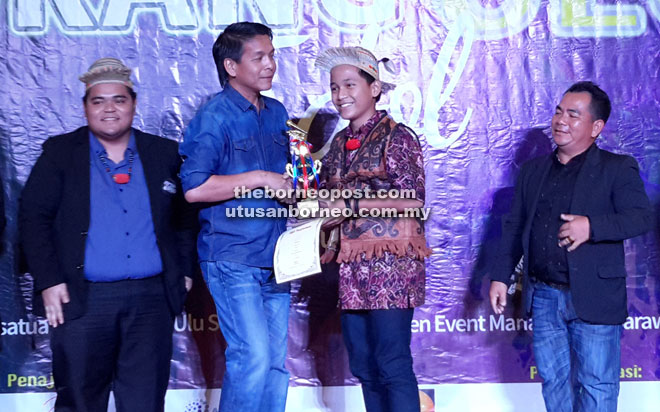 Dennis presents Watson with his prizes.

MIRI: Watson Tse, 13, won the first Orang Ulu Idol competition on Sunday with his rendition of an English song accompanied by the sape.

He defeated 30 other contestants in the Sarawak Orang Ulu Youth Association competition to win RM800.

Telang Usan assemblyman Dennis Ngau, who officiated at the event, said the competition gave Orang Ulu youths a platform to showcase their talents.

“However, to move forward, you have to find your own career paths and never give up. Those Orang Ulu who are successful faced many obstacles, but

they just tried and moved forward for their vision,” he said.

He called on the organiser to continue promoting Orang Ulu Idol winners during events such as festivals and weddings, as well as to help them record their own album.

Dennis also called on Orang Ulu youths to join the association as it could be a platform for interaction and information sharing.