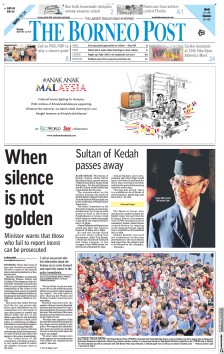 9/12/2017: HOME: Two boys held over sexual abuse of nineyear-old girl
MIRI: The police detained two boys aged 10 and 11 yesterday evening, in connection with the sexual abuse of a nine-year- old girl in Limbang on Sunday night. The suspects were picked up to facilitate investigation into the alleged offence at a… (read more)

9/12/2017: HOME: Clean water for 423 homes by year-end
MIRI: A total of 423 houses in Tudan Desaras, a resettlement area here, should be able to enjoy clean water supply by the end of this year. Piasau assemblyman Datuk Sebastian Ting said it would take about three months to complete the installation of… (read more)

9/12/2017: HOME: Many aspiring to be candidate for Miri seat
MIRI: The election fever has hit Miri as a few aspiring candidates have been seen moving around in Senadin, Pujut and Piasau – the three state constituencies under the parliamentary seat of Miri. The Miri parliamentary seat is presently held by Miri… (read more)

9/12/2017: HOME: Kampung Bakam villagers worry over riverbank erosion, speeding motorists
MIRI: Residents of Kampung Bakam are worried over erosion at the village’s riverbank which endangers those living nearby, says Sarawak PAS commissioner Jofri Jaraiee. According to him, those affected are appealing to the state government to construct… (read more)

9/12/2017: HOME: Over 30 take part in kids’ colouring contest
MIRI: A colouring contest organised by SMK Chung Hua Miri on Saturday in conjunction with its annual charity food sale saw the participation of more than 30 children. Raina Lim Yee Xuan emerged as the winner in Group A (five to seven-yearsold), with… (read more)