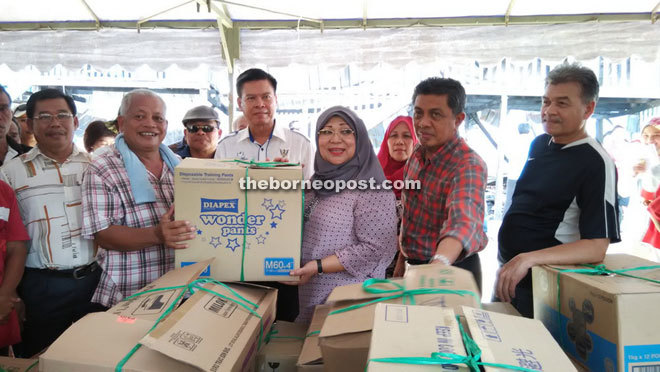 Bintulu Fire and Rescue Station dispatched two fire engines with 10 fire fighters to the scene after receiving a distress call at 1.34am.

The fire fighters arrived at the longhouse which is about half an hour drive from the station at 2.10am.

The longhouse was home to 105 residents from 18 families. Fortunately no casualties were reported in the incident.

The fire was put under control at 3.18am and the operation ended at 5.50am.

According to Bintulu fire station chief Di-Hata Gobel, before the arrival of fire fighters, the residents tried to put out the fire by themselves by using three fire extinguishers but failed due to strong wind.

“The strong wind is the main factor that caused the fire to spread rapidly,” he added.

Samalaju assemblyman Manjang Renggi and his wife were among the first to be at the scene to assist the fire victims.

The fire victims are receiving more assistance from various non-governmental organisations such as Rotary Club of Bintulu and Sarawak Dayak National Union and other agencies.

Tuai Rumah Lau Janteng, 54, said the fire is believed to have started from the back side of one of the rooms.

“I think it was 1.15am when one of the residents saw the flames outside his room.

“He ran to the ruai and grabbed a fire extinguisher, but the fire was already too big to be put out by himself,” said Janteng.

He said he then alerted other longhouse folks and even he himself also tried to tackle the fire but to no avail.

The longhouse folks only managed to salvage important documents.

According to Janteng, the longhouse was built in 1990.

Currently, the fire victims are putting up at a temporary shelter in front of the burnt longhouse.

They refused to move to the evacuation centre at Kidurong sports centre due to logistical constraints.

She expressed sadness after she was informed about the incident and hoped all fire victims would be strong in facing the challenge.

However due to the weekend, the application for financial assistance would only be processed by today, she added.

She said each victim would receive RM40 to RM70 to buy clothes, and each school children would get RM120.

In addition, she said each family would be given RM2,500 for building materials.

“Today we only distribute daily necessities, like food and drinks and cooking utensils worth RM250 per family,” she added.

According to Rohani, they will discuss with district officer Tuah Suni, Samalaju assemblyman Majang Renggi and the longhouse chief on placing the victims in a suitable evacuation centre.

She said if the residents agreed to move out, the temporary evacuation centre would be activated immediately.